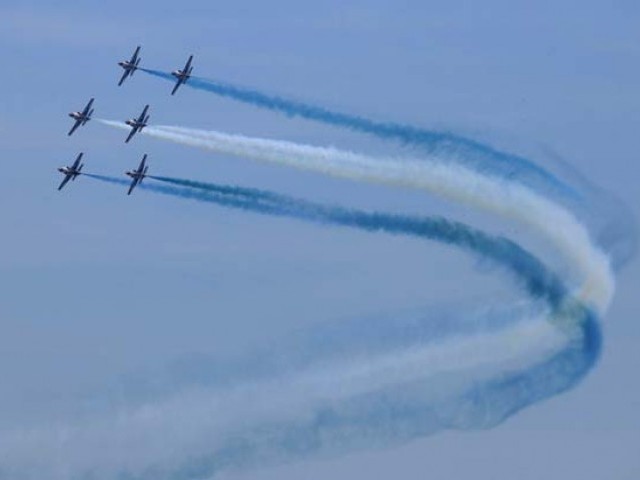 ISLAMABAD: Pakistan on Monday held its first Pakistan Day parade in seven years, a display of pageantry aimed at showing the country has the upper hand in the fight against the terrorists.

Mobile phone networks in the capital were disabled to thwart potential bomb attacks, some roads were closed to the public and much of the city was under heavy guard for the event.

The annual Pakistan Day parade was last held in 2008 before authorities abandoned it because of fears it could be targeted as militants increased their attacks on the military. The military says the Tehreek-e-Taliban Pakistan (TTP) is on the rack now thanks to an offensive waged against militant strongholds since June last year, allowing the display of martial pomp to be restarted.

The event comes just over three months after TTP gunmen massacred more than 150 people, most of them children, at a school in the northwestern city of Peshawar, an atrocity that shocked even conflict-weary Pakistan.

President Hussain paid tribute to soldiers fighting militants in the restive northwest, calling them his sons and pledging to go to the front line to hug them. President Mamnoon Hussain rides a horse-drawn carriage escorted by presidential guards as he arrives at the venue for the Pakistan Day military parade in Islamabad on March 23, 2015. PHOTO: AFP

“I also salute the innocent martyrs of the Army Public School Peshawar, who by sacrificing their lives made it clear to the enemy that this nation cannot be defeated,” the president said.

Both modern and more traditional elements of Pakistan’s military arsenal were on display, from nuclear-capable missiles and the new home-made armed Burraq drone to a camel-mounted musical band. There were fly-pasts by the air force, including some dizzying aerobatic displays by JF-17 Thunder fighters, which are locally produced in cooperation with close ally China. Nuclear-capable Nasr and Shaheen missiles, which have a range of up to 1,500 kilometres (900 miles), and Babur cruise missiles were also paraded.

Indian Prime Minister Narendra Modi tweeted that he had written to his counterpart Sharif to congratulate him on Monday.

Watch a video of the Wagah Border ceremony held to mark Pakistan Day.

Mobile phone services have been resumed in Islamabad and Rawalpindi.

I have written to Pakistan PM Mr. Nawaz Sharif, conveying my greetings on the National Day of Pakistan. As the parade comes to an end, Twitter users are all praise for the armed forces for a military show to remember.

#PakistanDayParade after ages such proud feeling, may we unite 2 respect &protect all our citizens with equality &dignity Pakistan zindabad

As the parade nears its end, troops fold the Pakistan flag and present it to President Mamnoon.

The president meets commanders who led various contingents during the parade. Members of all armed forces – army, air force and navy – now dive from above in a free fall jump.

The jumpers make a smooth landing after flying fearlessly in a display of professional perfection. PAF’s F-16 now makes an appearance, with its deafening thunder resonating in the parade ground. Ring Commander Usman Khalil flies the aircraft above the venue, putting up a magnificent display. In a glorious display of strength, Pakistan Air Force’s J-F 17 Thunder flies past the parade ground. Completing a full circle, the aircraft flies above the participants in full speed.

Flown by Commander Usman Ali, the JF-17 also performs thunder turn and barrel roll before it disappears in Islamabad skies. The aircraft are locally produced in cooperation with close ally China. Fly past begins as air vehicles including cobra attack and high-speed helicopters hover above the parade.

Floats representing Pakistan’s cultural diversity – with replicas of landmarks from Karachi to Khyber – take part in the Pakistan Day parade.

Nuclear-capable Nasr and Shaheen missiles, which have a range of up to 1,500 kilometres, and Babur cruise missiles are paraded.

The contingents also displayed Unmanned Aerial Vehicle which are playing a crucial role in intelligence gathering during recent times. The contingents include members of Army, Navy and Air Force personnel as well as Pakistan Police and Pakistan Rangers. Addressing the military parade, President Mamnoon Hussain says the sacrifices made by our ancestors are unrivalled.

The president lauds the efforts of army officers taking part in Operation Zarb-e-Azb. “I am proud to watch the parade today,” he adds.

“I also salute the innocent martyrs of the Army Public School Peshawar, who by sacrificing their lives made it clear to the enemy that this nation cannot be defeated,” the president said. Troops from the Special Services Group (SSG) march during the Pakistan Day military parade in Islamabad on March 23, 2015.  PHOTO: AFP

With regards to Pakistan’s sea growing by 50,000 sq kms recently, the president says that it is for the first time that the continental shelf limits of a country have been extended. While those present at the parade were busy fending off the unforgiving March heat, emotions ran high among Pakistanis watching the ceremony at home. Many took to Twitter to express what they called nostalgia for the past.

Been waiting 7 years for this moment #PakistanDayParade

#PakistanDayParade miss those days when was in school

President Mamnoon Hussain is the chief guest for the event while the parade will also be attended by Prime Minister Nawaz Sharif and Army chief General Raheel Sharif.

President Mamnoon Hussain rides a horse-drawn carriage escorted by presidential guards as he arrives at the venue for the Pakistan Day military parade in Islamabad on March 23, 2015. PHOTO: AFP

Security measures have been put in place for the joint military parade of Pakistan’s armed forces.

Police officials had confirmed that mobile phone service will remain suspended in the twin cities during the parade. The event comes just over three months after TTP gunmen massacred more than 150 people, most of them children, at Army Public School in Peshawar, an atrocity that shocked the world.

The last military parade took place on March 23, 2008 during the tenure of Gen (retd) Pervez Musharraf as a civilian president.

Security was beefed up in Rawalpindi and Islamabad by setting up checkpoints on different places and deploying personnel of the law enforcement agencies.

All the main arteries entering the parade avenue remain closed for traffic. Murree Road, linking Rawalpindi to Islamabad, was also be sealed.

PTI in no hurry to return to assemblies