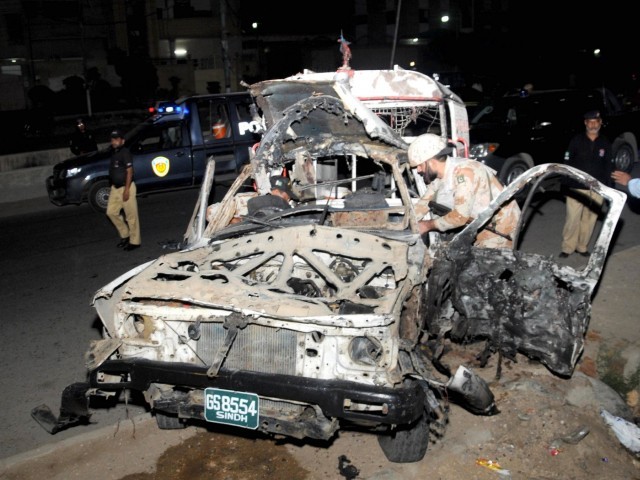 The Rangers mobile that was attacked in Karachi on Friday, March 20, 2014. PHOTO: MOHAMMAD NOMAN/EXPRESS

KARACHI: Just hours after a deadly bomb attack on the Bohra community in Karachi’s district south, the city witnessed another powerful bombing as a suicide bomber rammed his motorbike into a Rangers’ van in district central and detonated killing two officials and wounding at least four people.

The attack took place near Qalandria Chowk, North Nazimabad as Rangers were conducting a routine patrol.

“A suicide bomber coming from the wrong side rammed his motorcycle with the Rangers mobile,” claimed Gulberg division SP Faisal Noor while talking to The Express Tribune. “Investigations have been initiated, particularly with the help of a motorcycle and the human body parts of the suicide bomber found from the blast site.”

Law enforcers were also trying to obtain the finger or foot prints of the bomber to identify him.

A Rangers spokesperson confirmed that the two Rangers personnel had lost their lives while two others were receiving treatment for their injuries. He added that the attack seemed to be a suicide attack using a vehicle borne improvised explosive device. However, bomb disposal experts concluded that the bomber was wearing an explosive vest which contained around six kilogrammes of explosives.

Bodies of the dead and injured were taken to the Abbasi Shaheed Hospital for autopsies and medical treatment. The Rangers personnel who lost their lives in the attack were identified as Yar Muhammad and Qasim.

SHO Sarfaraz Gondal added that a couple, Khurram and his wife Saeeda, passing by the van at the time of the attack had also suffered injuries.

This is the first major attack on Rangers in the current year. Since an operation against militants started in city in September 2013, 35 Rangers have lost their lives while over 100 have been wounded in various attacks and encounters.

Meanwhile, Rangers spokesperson has termed the attack as a reprisal against the ongoing operation against militants in the city.

In a statement, DG Rangers Maj Gen Bilal Akbar asked the public to remove all security barriers within three days since it obstructs LEAs in performing their duties.

He added that after 72 hours, the Rangers will conduct an operation without discrimination against criminals.