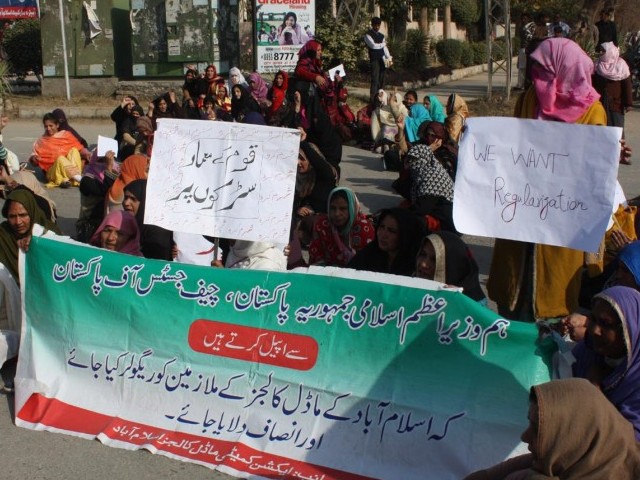 Ehsan Bangash, a teacher from IMCB F-8/4, said daily wage staffers have been serving in model colleges from many years, yet they are still deprived of their due right of regularisation of services as well as timely payment of salaries. PHOTO: INP

ISLAMABAD: Teachers working on daily wages at model colleges of the capital have pinned their hopes on the prime minister and the finance minister for payment of their salaries and job regularisation.

The salaries of the teachers have not been paid for more than four months.

The Daily Wagers Association of Model Colleges on Tuesday demanded of the government to get their pending salaries released.

There are hundreds of teaching and non-teaching staff that works on daily wages in 424 model and federal government institutes. Protesting daily wagers outside Federal Directorate of Education (FDE) and the National Press Club (NPC) has become a common sight recently.

In spite of appointment of a permanent director general of the FDE, the issue has yet to be resolved.

The FDE Director General, Aamir Khawaja met the Capital Administration and Development Division (CADD), Secretary Khalid Hanif on Tuesday and informed him that verification of over 3,000 teachers and daily wagers, regularised by the Pakistan People’s Party government in the last few months of its term, was completed.

“Many names were found to be fake having forged attendance for two years,” said a high-ranking official privy to the development. The official said that at one institution in Bhara Kahu 13 teachers were claiming to be members of the staff, while in fact just three teachers were doing their job.

Around 200 staffers were found fake in Bhara Kahu and 15 in Nilore, while the figures concerning fake staff in urban areas nearly matched the actual number of staff working on daily wages.

The CADD secretary said that names of all the verified teachers and non-teaching staff would be displayed on the website of FDE by Wednesday (today). “Only those will be given due salaries and will get a go-ahead for regularisation,” he said.

Khawaja said that a complaint cell would also be established at the directorate so that those with fair credentials could get themselves registered.