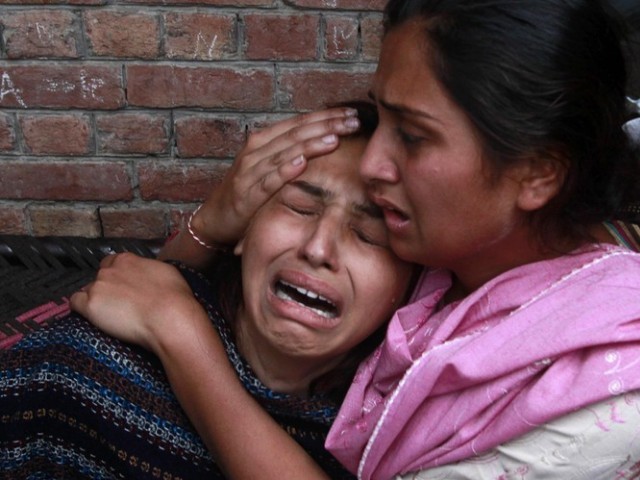 LAHORE: Fourteen people were killed and more than 70 injured when two Taliban suicide bombers attacked churches in  Lahore on Sunday, sparking mob violence in which two other suspected militants died.

Up to 4,000 Christians later took to the streets of Lahore, many armed with clubs as they smashed vehicles and attacked a city bus station in a rare show of anger.

The bombings occurred during prayers at two churches located around half a kilometre apart in the city’s Youhanabad neighbourhood that is home to more than 100,000 Christians, officials said. Doctor Mohammad Saeed Sohbin, medical superintendent of the nearby General Hospital, told AFP: “We have received 14 dead bodies and 70 injured,” adding that the figure did not include the suspected militants who were lynched or the bombers.

Zahid Pervez, the top health official in Lahore, confirmed the death toll and told reporters that 78 people were wounded in both attacks.

Broken window panes, blood and shoes were scattered across the blast sites. Police spokeswoman Nabila Ghazanfar said two policemen guarding the churches were among those killed in the attacks, while two people were beaten to death by protesters who took to the streets after the blasts.

“Policemen on duty at both the entrances tried to stop them but the bombers blew themselves up,” she told AFP.

“The angry mob protesting after the blast beat to death two people whom they suspected of being associates of the attackers.” An AFP photographer saw the bodies of the two suspected militants on fire after the beatings. It was not clear whether they were still alive at the time.

The Tehreek-e-Taliban Pakistan’s Jamaatul Ahrar faction described the blasts as suicide attacks and vowed to continue their campaign.

Christians make up around two percent of Pakistan’s mainly Muslim population of 180 million. They have been targeted in attacks and riots in recent years. Sunday’s attacks were the worst on the community since a devastating double suicide-bombing in Peshawar in September 2013 killed 82 people.

That came months after more than 3,000 Muslim protesters torched some 100 houses as they rampaged through Joseph Colony, another Christian neighbourhood of Lahore, following blasphemy allegations against a Christian man.

The thousands of Christian protesters who clashed with police on Sunday attacked their cars with stones and sticks, as women wept and beat their heads and chests.

The protesters, some wearing crosses round their necks, later turned on the city’s bus rapid transit system — a signature project of the ruling PML-N party of Prime Minister Nawaz Sharif.

PM Nawaz in a statement condemned the church bombings and “directed provincial governments to ensure the security of (the) public and their properties”. Security tightened across churches in the country. PHOTO: AFP

Zaeem Qadri, a spokesman for the provincial government, said efforts were being made to talk to the protesters to stop the rioting but “emotions are very high because their churches have been attacked”.

Christians also took to the streets in other cities, including Karachi, where around 200 protesters blocked a main road and burnt tyres. There were also demonstrations in Peshawar, Multan and in Quetta.

Sunday’s attack was the first by the Taliban since three of their major factions said on Thursday they had reunited.

Pakistan Army has stepped up its fight against militants since Taliban gunmen massacred more than 150 people, most of them children, at a school in Peshawar in December.

A moratorium on executions in terror cases was lifted and the constitution amended to set up military courts for the speedy trial of terrorism cases. Later, the death penalty was reinstated for all capital cases.

The negotiations between protesters and police are successful, Express News reports.

The demonstrators have agreed to unblock Ferozepur Road.

Fourteen people have been killed and 75 injured, according to Express News. A woman cries after her brother was injured in the attack on the church, at a hospital in Lahore March 15, 2015. PHOTO: REUTERS

Members of Christian community are protesting in various parts of the country, including Karachi and Sialkot.

In Karachi, protests against the attacks are being held at Essa Nagri and North Nazimabad.

Twenty-five-year old Qaisar, a security guard of St John’s Church, sacrificed his life while attempting to stop the suicide bomber from entering the church.

Similar to Qaisar, Yousuf the security guard of Christ Church also lost his life while protecting the worshippers.

The three policemen held hostage by the enraged mob have been released and are being shifted to a hospital.

The enraged mob refused to talk to Ports and Shipping Minister Kamran Michael.

Missionary schools in Karachi and Punjab announce they will be closed tomorrow.

As the number of injured rises to 70, hospitals in Lahore have appealed to people to donate blood.

“Fourteen people have been killed and 68 others have been injured,” General Hospital medical superintendent says.

The deceased include two policemen. The mob has attacked the Metro Bus terminal.

Members of the Christian community are also protesting in Karachi against the attacks.

Pastor David, a local cleric at the site, says: “One blast took place at the entrance of one church where a congregation was going on. Another blast took place in the second church,” adding that the two buildings were 500 metres apart.

“At least 10 people were killed and 55 wounded, Khawaja Rafiq, the health adviser to the provincial chief minister says. Women mourn the death of their relative who was killed in a suicide attack on a church in Lahore. PHOTO: REUTERS

“Mosques and churches across Punjab have been put on high alert,” IG Punjab says.

Mayhem unfolds on Firozpur Road in Lahore as an enraged mob gets violent. Members of Christian community are also protesting at Nankana Sahib against the attacks, Express News reports.

Express News screengrab of the protests

The mob has reportedly taken three police officers hostage in a shop, according to Express News.

Reportedly the policemen were watching the match during the time of the blast which is why the mob has taken them hostage.

The enraged mob has hurled stones at the Metro Bus and blocked its route, Express News reports.

“I was sitting at a shop near the church when a blast jolted the area. I rushed towards the spot and saw the security guard scuffle with a man who was trying to enter the church, after failing, he blew himself up,” witness Amir Masih tells Reuters.

“I saw his body parts flying through the air.”

The guard died as well, he says.

It was not clear if the first blast was also a suicide bomber, Masih adds.

“Ten people have been killed and over 48 injured in the attacks,” General Hospital spokesperson says.

The deceased include a child and a police constable.

Our correspondent Sarah Eleazar reports the news of a third blast was a mere rumour.

The main gate of St John’s Catholic Church was destroyed due to blast, our correspondent Rana Tanveer reports.

“Owing to the large number of people expected to attend the services, the church administration had divided the morning service into two parts,” Nadim Anthony, a member of the Christian community told The Express Tribune.

He said the first service was held from 8am to 9am, while the second service was taking place when the blast took place.

“Both the blasts were suicide attacks,” he further claims.

The death toll now stands at 6, according to AFP.

Interior Minister Chaudhry Nisar has condemned the blast and sought a report from police.

Tehreek-e-Taliban Pakistan Jammatul Ahrar has claimed responsibility for the attacks.

“We have carried out the attack,” TTP JA spokesman Ehsanullah Ehsan told The Express Tribune via phone.

Ehsan used his Afghan mobile number to call the media in Islamabad and Peshawar.

“We have reached Lahore, the center of Punjab province, which is a challenge and a warning to the rulers,” Ehsan said.

He said the ‘Aafia Siddiqui Brigade,’ a group of the suicide bombers, was assigned to carry out the attack.

This is the first claim from TTP JA after having merged with the TTP.

Police have resorted to aerial firing to disperse the enraged crowd as mayhem unfolds in Youhanabad.

The death toll now stands at 5, according to rescue officials.

Further, 53 people have been injured.

Four killed, 45 injured in the twin attacks , according to Express News.

Our correspondent Sarah Eleazar reports a third church in F Block has also been targeted.

Worshippers have gathered outside the churches after the explosions and are protesting against the government for not providing sufficient security.

Eye witness Aslam Pervez Sahotra says he is sure attack on Catholic Church was a suicide blast. “Children and women are hurt in the explosion,” he adds.

Sahotra says the blasts took place due to lack of security. He further says both the churches were crowded when they were targeted.

As per initial reports, there were 800 people present inside one church and 1,100 people in the other.

A police constable and a child have been killed in the blasts, Express News reports.

An emergency has been declared at General Hospital.

Our correspondent Rana Tanveer reports that Christ Church and Catholic Church situated at short distance in Yohbabad area were attacked.

Aslam Pervez Sahotra, an eye witness, tells The Express Tribune that the worshippers were targeted when they came out of the churches after Sunday service.

Further, they added the Sunday church ceremony was underway at the time of the blasts.

Forty-five people have been injured, according to Express News.

The enraged mob is dragging the body of the deceased suspect and beating it up in reaction to the blasts.

His body has been set on fire. The deceased were suspects and beaten to death by an enraged mob near the blast site.

A suspicious person has been held by the people from near the blast site. The enraged crowd has beaten up the man severely.

The injured have been shifted to General Hospital.