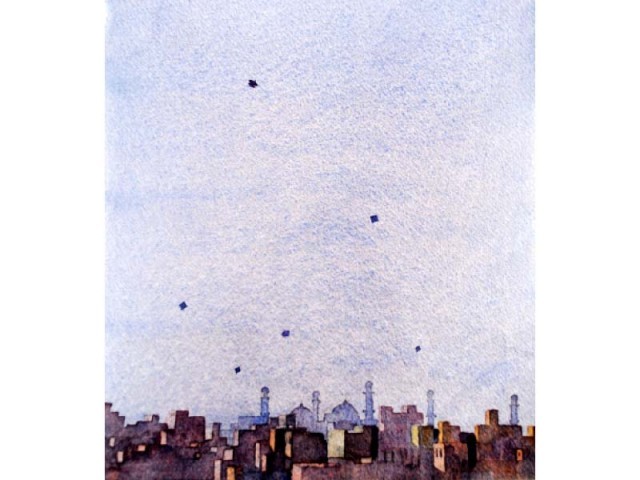 Artist Shaan Taseer’s work seems to be inspired by fading cultural values and the law and order situation affecting life in cities.

Nature, man and reason are three important aspects of his works, all of which echo in the 32 pieces on display at the Chawkandi Art Gallery till March 17. He uses different symbols to depict each of the three.

One of his most intriguing works is the ‘Lal Masjid‘ which comprises white domes, red flowers and distinguishable tombstones. “These red flowers are representing nature – they are the blood and lives which are lost in the war within the country,” the artist told The Express Tribune. “These domes represent man.”

In each work, the artist has employed different symbols to depict the presence of life without using humans. “I wanted the city to speak for itself and that is why I added kites and balloons just to give a feel of life.”

Commenting on why the subject is just cities and no human presence, the artist explained that the way a glimpse of human presence is given in each work comments on how we have forgotten the old eras and become desensitised.

Talking about his masterpiece, titled ‘Maghrib ki Azaan’, he recalled his memories of kites flying in the sky with Badshahi Mosque in the background and lamented how rare the scene has now become. “The reason of the fading social activity from our society is the cultural destruction which is a part of our lives now,” said Taseer.

The artist commented on the lack of awareness people have of history in an untitled work. “People don’t know about ‘Ait ben haddou’ as one of the oldest cities in Morocco but as the city where the famous Hollywood movie, ‘Gladiator’, was shot,” he said. “I drew the ‘Coca Cola’ logo here to show how marketing has taken over our culture and values.”

‘Dekh magar pyaar se’ was Taseer’s favourite work. “The city wants people to give love and affection to it,” he said, explaining the concept behind the piece. “The plane flying over the city with this message is how a city actually feels.”

In another untitled work, Taseer depicted the three facets of life that he describes as nature, man and reason. According to the artist, flowers represent nature, white small houses depict man and life and the dark blue sky symbolises the reason of our life. “Nature is represented by red because nature is blood, human and life.”

Using watercolour to express himself as a person, Taseer describes art as his passion. “I have the love for art and that was what taught me how to play and express through colours,” he said.