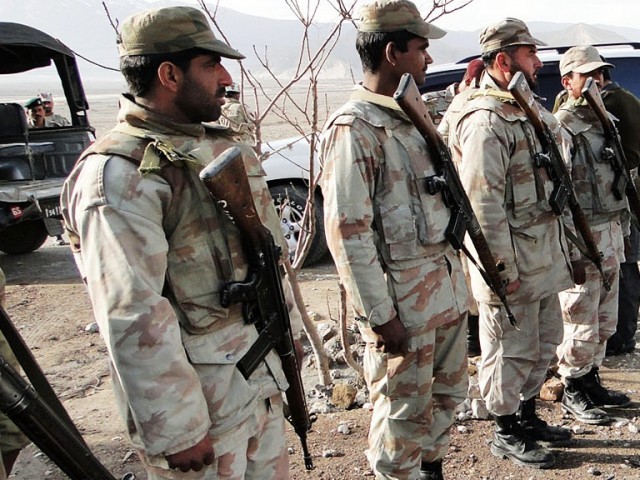 QUETTA: Security forces said on Thursday they killed 13 insurgents in a gunfight in Balochistan.

One militant and a civilian were meanwhile killed during an attack on a checkpoint in Peshawar on Thursday.

The clash with separatists took place on Wednesday in the area of a gasfield in Pirkoh, some 245 kilometres southeast of Quetta.

“We killed 13 miscreants hiding in the gasfield when they refused to surrender,” Manzoor Ahmed, a spokesman for Frontier Corps told AFP.

“They resorted to a fight which lasted for several hours,” he said, adding there was no loss on the security forces’ side.

“We have evidence that they were members of the BRA and were miscreants,” he told AFP.

“We took this action to set up peace in the region and we will act against the miscreants wherever we get an information about them,” he added.

Meanwhile, Thursday’s incident in Peshawar erupted after military personnel at a checkpoint intercepted a suspicious man and he took out his gun and started shooting, senior police official Omar Rana told AFP.

“The attacker and a passenger in a van were killed and six others were wounded in the exchange of fire,” Rana said.

The incident took place close to US consulate at the entrance of Peshawar garrison and just a mile away from the Army Public School where Taliban gunmen killed 154 people, most of them students, in December.

Pakistan Army have been engaged in a full-scale offensive against Taliban and other militants in North Waziristan and Khyber tribal districts since last year.

Attacks in general have decreased since the offensive but security forces still face frequent assaults.