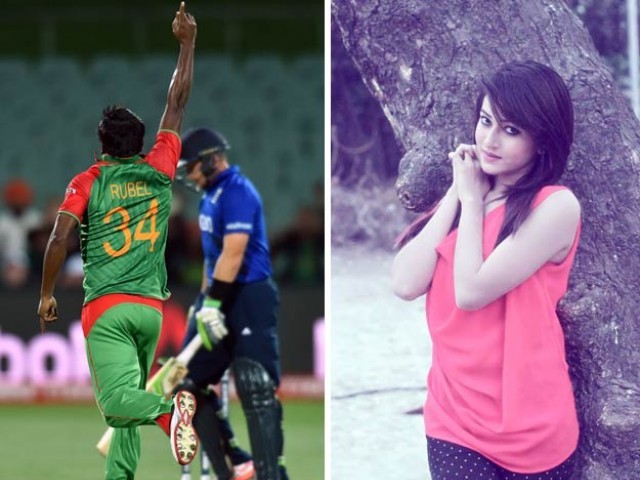 Naznin Akter Happy, 19, made the rape allegation earlier this year after claiming 25-year-old Rubel had reneged on a promise of marriage that he made while they were having an "intimate affair".

DHAKA: A Bangladeshi actror who filed a rape case against cricket star Rubel Hossain said Tuesday she was withdrawing the charges against the fast bowler, a day after his match-winning heroics at the World Cup.

Naznin Akter Happy, 19, made the rape allegation earlier this year after claiming 25-year-old Rubel had reneged on a promise of marriage that he made while they were having an “intimate affair”.

The allegation had threatened to scupper Rubel’s chances of appearing in the World Cup after he was remanded in custody by a court in Dhaka.

But he was later granted bail until the end of the World Cup in view of “national interest” as he was a key member of Bangladesh’s team.

In the latest twist of a saga which has gripped the conservative Muslim-majority country, Happy said she had decided to forgive her former boyfriend who starred in a dramatic victory over England on Monday.

“I’ve forgiven him. I am not going to continue the case against him,” Happy told Channel 24 television on Tuesday.

“I am not going to give any testimony or evidence against (him). And if I don’t carry on with the case, then there is no case.”

Her move came hours after her lawyer, Debul Dey, said he would no longer represent Happy as he did not want to put Rubel under pressure while he was representing his country in Australia and New Zealand.

Rubel took four for 53 in the win over England in Adelaide, which enabled Bangladesh to qualify for the World Cup quarter-finals for the first time. During the match, the actor posted a number of messages on Facebook account to show her support and cheering for Rubel.

She even sent a kiss his way after Bangladesh won, “I’m speechless.”

Although victims of alleged rapes are usually entitled to anonymity, police waived reporting restrictions after Happy told the Bangladeshi media that she would drop the allegations if Rubel agreed to marry her.

Rubel has consistently rejected the allegation of rape or claims that he had offered to marry Happy, instead accusing her of “blackmail”.

Happy became a household name for her debut movie “Kichu Asha Bhalobasa” (Some Hopes, Some Loves) which hit cinemas in 2013.