APS survivors and PTSD: Parents urged to ‘get help’ instead of waiting on govt to help children 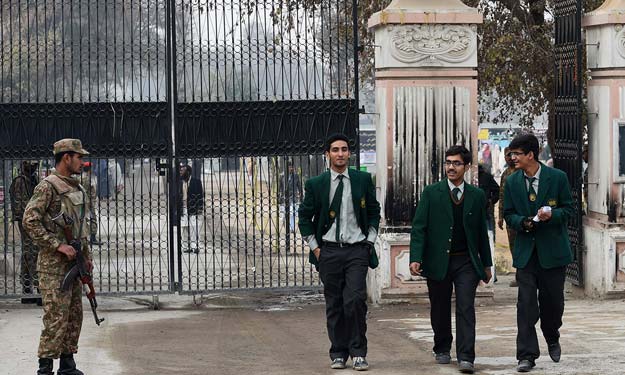 The brochure goes over rage as a natural consequence in detail. It provides guidelines to recognise anger and explains in some detail its manifestation. PHOTO: AFP
PESHAWAR/ KARACHI:

Psychological intervention is necessary as the events of war lead to the development of post-traumatic stress disorder (PTSD) in children. This seems like an obvious conclusion, one that is supported by many studies, including Symptoms of PTSD among Children Living in War Zones in Same Cultural Context and Different Situation, published in 2013. At least 90% of 381 schoolchildren from Hebron, Palestine who participated in the study suffered from moderate to severe symptoms of PTSD or met the full criteria of the disorder. A similar research looked at the psychometric responses of 358 adolescents randomly selected from Gaza Strip. It concluded that apart from 11.8% of the sample, the rest displayed symptoms or full onset of PTSD (Thabet A, EL-Buhaisi O & Vostanis P, 2014). There are numerous such studies which differ in methodology or micro-findings, but almost all of them support the correlation of trauma and stress or anxiety-related disorders, especially PTSD.

What happened in Army Public School (APS) Peshawar on December 16, 2014 is no less than a traumatic event witnessed in a war setting, say psychologists and psychiatrists. Schoolchildren across the country are experiencing fear as threats continue to emerge in different cities.  Parents are reporting children who survived the APS massacre are displaying low-levels of interest in going back to school and in other activities.

Earlier, Tufail Ahmad, father of slain APS student Sher Shah and surviving grade eight student Ahmad Shah, told The Express Tribune that children are still scared. Ahmad has lost his interest in studying or going to school, said Tufail. “Since school reopened, he has only gone twice and seems distracted. He lost his elder brother and around 30 friends in the attack. He tells me every time he enters the school he is reminded of them and cannot concentrate on lessons,” added Tufail.

The swiftness of the government’s response to this end suggests there is an understanding of the urgent need to help the survivors. As yet the government has started setting up a Child Trauma Centre at the psychiatry department of Lady Reading Hospital, announced foreign trips for children who survived and the Combined Military Hospital (CMH) Peshawar distributed brochures of mental health guidelines among the parents of APS students.

However, those who are currently dealing with APS survivors claim a lot more needs to be done a lot faster. One APS survivor’s father Manzoor* told The Express Tribune he decided not to wait for any government intervention and initially sent all his children for psychological help. His son was in close vicinity to the terrorists while they were shooting and he still shies away from talking about it with his family, said the father.

“But we knew something was wrong, he would act disturbed; he started saying he was ‘Super Man’ that he was ‘bullet-proof’ and could save all the children,” said Manzoor. “We asked him if he wanted to change his school but he said no, so instead we got him help.”

“Manmade or natural, all disasters cause (psychological) disruptions; anxiety rockets, there will be depression and people will feel insecure,” Peshawar based psychologist Shahnaz Sanagul told The Express Tribune. She acknowledged the government’s plan is still in its initial stages and encourages parents to look towards other avenues to seek help for their children.

“There will be a reaction; some will take time in recovering and some will do it soon,” she explained. “That is why I urge parents of APS survivors to send their children to therapy soon. The sooner you get to a therapist, the higher the chance of recovery.” Often, “the one month period after [a traumatic event of this scale] is grief reaction; even if the person did not directly lose someone,” she said.

The first reaction for most children, according to Sanagul, is denial. “They don’t want to talk about it.”

Some of her young patients from APS were still in that stage. “They would say hua hai, koi bari baat nahi, that nothing big happened,” said Sanagul. “But their parents would report that the child is asking questions which reflect deep-set fear.”

She explained the fear remains if there is no cathartic process, “if you don’t offer therapy; the family can only do so much other than lend an ear.”

“PTSD takes time in manifesting; it builds up over a few weeks before the symptoms really hit a person.”

What to keep an eye out for

According to Sanagul, parents should keep an eye out for the following symptoms post APS attack or any other major trauma:

sounds, associating them with the incident.”

• Isolation, attempts to avoid thinking or talking about the traumatic

event, including avoiding places and people who trigger the memory

How to deal with potential PTSD

After counselling APS survivors, Sanagul said she reached out to the parents so the child has an environment at home conducive to healing.

“Parents tend to shame the child which makes the patient retreat more; instead, calm the child, distract them with tasks, take time out for them and make them understand what they are feeling is entirely natural,” recommended Sanagul.

“You have to encourage talking; this helps prevent the child from suppressing memories.” Children will blank out bits or claim they have forgotten what happened, she said. “It is because they don’t want to recall; these things have to be drawn out of them gently. Let them speak and hear them carefully.”

When children display rage, many parents tend to ask, “why is my child acting out, he wasn’t like this,” said the psychologist. “Instead of punishing or snubbing this behaviour, we recommend both positive and negative reinforcement alongside dialogue.”

If all these symptoms persist for over a month, Sanagul says in all likelihood the survivor has PTSD.

For some of her patients, Sanagul recommended a break from television and other outlets of news as images of the attack on APS can trigger episodes or manifestations of PTSD.

“The psychologist told us to keep our son occupied with positive activities; anything but television,” shared Manzoor. “He keeps busy with games after his homework.”

Some therapists use exposure therapy in which PTSD patients are taught how to slowly and repeatedly approach cognitions and situations related to the traumatic event using relaxation techniques.

Sanagul says desensitisation is also a helpful approach whereby the patient gradually works up to facing the most traumatic or distressing triggers.

How does going to school impact the survivors of APS? Sanagul says in part, if this is a controlled activity, it can be a positive step in dealing with trauma.

“One step of desensitisation is exposure to the site,” she explains. “If for example we don’t send them back to school for a year, they will hold on to the same psychological condition, the same memories and fears.”

Going back to school will help but not if it is unmonitored, says Sanagul. “They need to be equipped with tools which give them control when they go back to ground zero. You have to teach them breathing techniques and other tips so he can calm himself down.”

For smaller children, she recommends involving them in play.

“When the child goes back, the fear reduces slowly, desensitisation takes place and eventually the child will overcome the fear, the anxiety.”

PTSD is triggered when an individual “experiences or witnesses the traumatic event in person; learns the event occurred to someone close; experiences first-hand repeated or extreme exposure to details of the event (not through media),” states the Diagnostic and Statistical Manual (DSM) of Mental Disorders, Fifth Edition.

The psychological disturbance caused significantly impairs social and professional capabilities and functionality. Other causes like a comorbid medical condition, substance abuse or medication have to be ruled out for the diagnosis of PTSD.

According to the US Department of Veteran Affairs, PTSD in children does not result in the same manifestations as it does with adults.  Children might not have flashbacks or omit part of the traumatic memory, but they will confuse the order of events. “They also look for signs for the traumatic event to repeat itself as that convinces them they might be able to avoid it in future,” says the VA site. Pre-teens can also keep repeating the trauma in their play. Such games are not cathartic, adds the site.

Symptoms in teens resemble those of adults. However, teenagers are likely to show symptoms of arousal such as impulsive and aggressive behaviours. 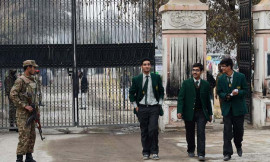 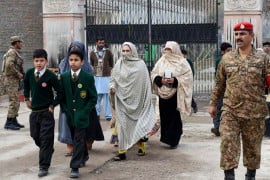 The struggle for rehabilitation

Bint E abbasi | 6 years ago | Reply My eyes are full of tears.. Compulsions kills Me. I wish I could went there and spent time with. at least I can give by my self. Looking forward to such group of people, doctors or else.. who can bring me there...!!! I wish..
Ansari | 6 years ago | Reply @Maddy: Agreed to you mady
VIEW MORE COMMENTS
zara haq | 6 years ago | Reply “Children might jump at small sounds, , I suffer from this and i can understand it.and it was some unpleasent experience that gave me this. I can scream my lungs out when i get scared this way.
zara haq | 6 years ago | Reply @Maddy: Typical propaganda starts. Majority of those kids were civilians' children and not army brats. And right now they need care, because the whole event they went through, when they were inside the school and they knew there is an attack.watching their freinds shot at ,a point blank range, a mass massaccre, teachers burnt alive before their eyes, themselves getting shot, but most of all the fear that one goes through in such experience could have a long longlasting impact on a human mind. And they were kids. These are psychological issues must be dealt with now. Unfortunately, gov isn' giving as much help as needed. As zaman pointed out about maryam nawaz.
zaman | 6 years ago | Reply @Maddy: In a way the children are paying for the sins of the fathers (Leaders), whilst Maryam Nawaz and the likes can get their children's' education and security provided for at the expense of the deprived unfortunate masses out with the system. The tragedy of these children and many like them will eventually fade away ,with government actions being diluted until no action with results is foreseen.
Maddy | 6 years ago | Reply I fail to understand the over hyped incident with so much exaggerated conditions of these children. Being a Child in any third world country, especially in Pakistan is not easy for anyone. There are millions homeless and dreamless children you can find on the roads, which these generals in bullet proof cars and ultra high security protocol will never see. I am not saying we should not do something about these ARMY public schools children but in parallel we must do the same for other Pakistan children. A child born in a slum should get equal love and humanitarian efforts than the child born in a slum. No Offense!!
Replying to X
Saved ! Your comment will be displayed after the approval.
Error !
Error! Invalid Email.