Saarah Hameed is the only Muslim in a pool of 600 women employ­ed in the Indian aviati­on sector­
By Web Desk
Published: March 8, 2015
Tweet Email 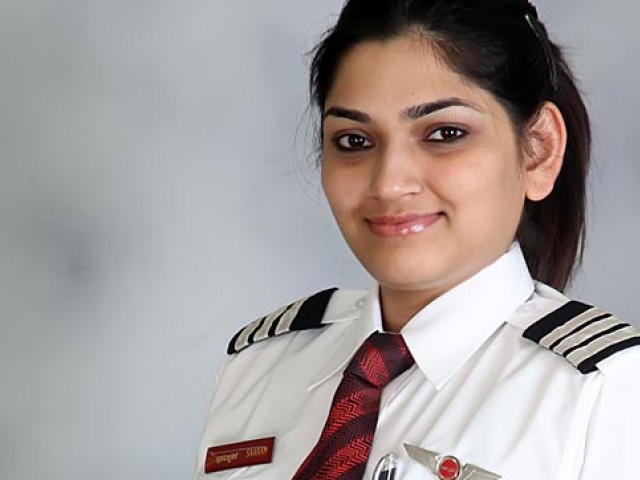 India’s only female Muslim pilot urged women on Sunday to not let the ‘community’ kill and mould their dreams.

“Don’t fret over what the community thinks of you. And don’t let them kill your dreams,” said Saarah Hameed Ahmed, according to Hindustan Times.

The 25-year-old from Bengaluru, the only known Muslim in a pool of 600 women employed in the Indian aviation sector, hosts a series of reactions when she tells people she’s Muslim.

“I just love the look on people’s faces when they discover I am Muslim,” she said.

However, the reactions are not always amusing. Saarah admitted like many others she too had to face the brunt of Islamophobia that gripped the world post 9/11 but she still managed with a combination of ‘humour’ and ‘tact.’

However, it’s not just community and other people as Saarah even faced a battle at home over her decision to join the aviation sector.

“Initially, none of us encouraged her. In our community girls don’t usually take up professions where they have to stay away from home and live in hotels without an escort,” her father Hameed Hussain Ahmed said.

However, when Saarah refused to back down, her father spoke to his friend Atif Fareed, a senior pilot in the United States.

“Fareed told me that I should consider myself lucky because most Muslim girls don’t even dream of flying. If he hadn’t convinced me, I might have made the blunder of killing Saarah’s dreams,” he said.

“Those days most Muslim students were being denied US visas. When she got the visa without any trouble I saw it as a final message from God,” he added.

Read: Excuse me, while I touch the sky: Meet war pilot Ayesha Farooq

The pilot committed to her profession also dreams of having a family.

“I really want to get married and have children,” she said. However, many of her suitors have either wanted her to quit her job or move cities.

“My father has shooed away people asking them to get their sons to quit his job and move cities,” Saarah said.

Two other Muslim pilots are making their way to the aviation industry in India.

Ayesha Aziz, 18, is an aspiring pilot from Baramulla, Kashmir, and she has already obtained a basic flying licence.

Fatima Salva Syeda, 26, is a licenced commercial pilot. But she has to qualify additional training before she can be a professional pilot.