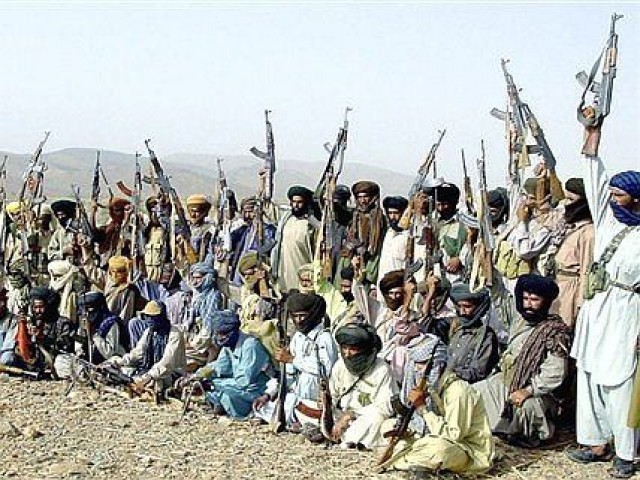 Baloch insurgents at a camp south of Quetta, PHOTO: AFP

A briefing given by the then director general of military operations, Ahmed Shuja Pasha, to parliamentarians has been characterised as being supportive of the US.

According to the WikiLeaks cable, a draft of a presentation shared with the US by National Security Adviser Mahmud Ali Durrani stated that Pakistan had not allowed the US to conduct cross-border operations. Parliamentarians were also told that India and Russia were involved in the insurgency in Balochistan. Pasha said India has established nine training camps along the Afghan border, where they are training members of the Baloch Liberation Army. He also claimed “India and the UAE (reportedly due to opposition to construction of the Gwadar port) were funding and arming the Baloch. Pasha also claimed that the Russian government was directly involved in funding/training/supporting the insurgency.”

Former president Pervez Musharraf had also raised the point with US officials in September 2007. According to a memo, he had asked the US to intervene on “the ‘deliberate’ attempt of Kabul and New Delhi to destabilise Balochistan.”

Musharraf told officials that Pakistan had proof that India and Afghanistan were “involved in efforts to provide weapons, training and funding for Baloch extremists through Brahamdagh Bugti and Baloch Marri, two Baloch nationalists, who were living in Kabul.”

“We have letters instructing who to give what weapons [and] to whom,” he said.

A source who had attended the in-camera session told the US, “Pasha’s briefing consisted mainly of videos and photos of Taliban and other terrorist organisation’s activities that demonstrated the militants were both inhumane and un-Islamic.”  According to the source, “At several points, female parliamentarians asked the army to stop showing disturbing footage, including a gory beheading.”

However, the memo notes,  Pasha did not mention the threat from Tehreek-e-Taliban Pakistan leader Baitullah Mehsud, who was killed in a drone strike in August 2009.

In a meeting with US Senators Joe Biden (now US vice president) and Lindsey Graham, Kayani said: “He was painfully aware that the army had to retake South Waziristan since 90 per cent of the suicide bombers came from Baitullah Mehsud.” “He has to be cut down to size,” he said.

Pasha briefed members on what he termed “United States government drone incursions and missile strikes.” The source told the embassy that Pasha praised the US for its support through these methods and showed statistics to parliamentarians that demonstrated the vast majority of those killed in these attacks were either foreign or Taliban fighters.

However, politicians believed that the briefing had not provided any new information. Details of a dinner which was attended by several political leaders in attendance noted that “Pasha, unsurprisingly, defended Pakistan’s sovereignty against US incursions.”

However, they “did not share details from the briefing about foreign fighters killed in the alleged US drone attacks.”

Leaked documents show support from Prime Minister Yousaf Raza Gilani for drone strikes, and that the Pakistan Army asked for US special operations elements to be deployed with the Frontier Corps.

Federally Administered Tribal Areas (Fata) parliamentarians Shaukatullah and Munir Khan Orakzai and Muttahida Qaumi Movement leader Farooq Sattar said at the dinner that they had pointed out during the question-and-answer session in parliament that “not all terrorists were tribals and that the government needed to address growing extremism in Punjab.”

Other details about the Inter-Services Intelligence have also emerged in the leaked documents.

According to an October 2009 memo, ISI director general Pasha had told the US ambassador that he had “followed up on threat information that an attack would be launched against India
between September-November. He had been in direct touch with the Israelis on possible threats against Israeli targets in India.” Pakistan does not recognise Israel as a country.