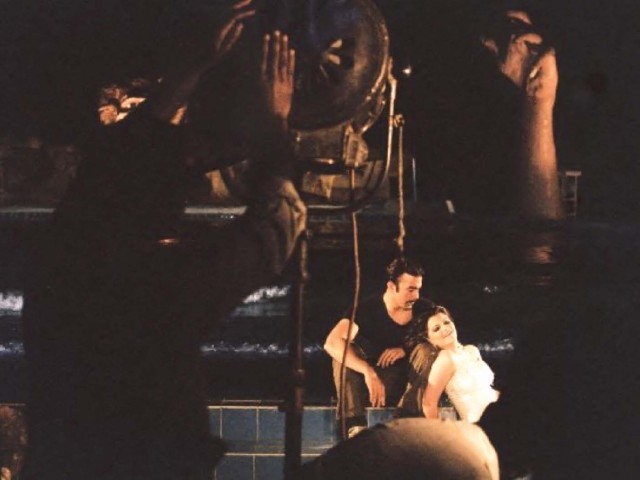 ISLAMABAD: Video killed the radio star, but everything under the sun had a hand in the bloody murder of Pakistani cinema, or so The Forgotten Song (Bhuli Huwi Hoon Dastaan) in its tepid way would have you believe.  Scrambling to play the blame game, the documentary by Karachi based filmmaker or ‘slashie’ (as he was referred to) Adnan Malik, is one long philippic that almost names the guilty in a slanted, untempered attempt that botches 90 minutes of film. I do not wish to sound so impassioned or be vexed and thus biased, but where the documentary and its slew of interviewees from Nadeem to Papoo Samrat to a billboard painter, bemoan the reasons why our industry is dead on its feet, it is exactly films like this that add salt to the wounds. Will this movie, besides sponsored viewings, such as this one by the Trust for Voluntary Organisations, ever see the light of day? Will it bring acclaim or win any awards? If my opinion is anything to go by then know that 45 minutes into the screening I left, not as they say in disgust, for that would be too strong, but certainly in irritation.

But let us, as they say be fair, lest one is accused of the same sin. It is without a doubt that one must lament the passing of our film industry; a crying shame that we and the industry itself have allowed to happen and yes this documentary is clearly concerned about it, yet for some inexplicable reasons decides to readily take sides. Names are named and in one example, industry maven Shahzad Gul takes it upon himself to rest the entire blame upon the shoulders of Shan, calling the actor in terms thereabout, the worst thing to happen to the industry. Such partial mudslinging is unbecoming of a film that at least attempts to be balanced and holistic. A dated, out of context interview with the actor is shown where he talks about his films and his acting.  Could they not have gotten a recent interview?

Of course one must always do things in threes and fours and every interviewee has his/her own score to settle, levelling the blame on whoever they have a beef with. Samina Peerzada (mohabat kya hai?) takes particular exception to the encroachment by the Gujjars for becoming financiers/producers, imploring them in very classicist terms to leave film to the ‘educated’. Then of course ‘senior actor’ Nadeem starts laying it on ‘unprofessional’ young actors and through  inference using stock footage, all these young actors are shown; the actresses in particular coming off the worst with some calling them ‘prostitutes’  as in ‘ it has become an industry of pimps and prostitutes’ (Ms Peerzada’s words who has for the longest time flitted away to TV) , while others invoke the ‘casting couch’ and Mr Papoo Samrat talking about dancing girls while clips of Meera are shown. One is not denying that there aren’t problems with our films but to almost libel isn’t very introspective at all.

Transitions between scenes are in homage, used from old films but the quality is very poor and their duration barely noticeable.  The soundtrack is cheesy in its coincidence, trying to match what is going on in the scene and here too taking pot shots at people. The subtitles in English are subpar, neither matching the original Urdu, at times saying something else nor using language that is appropriate.

Overall, the documentary is a possibly well intentioned effort that gets bogged down in petty squabbling, sheer puzzle and ulterior motives. A film that is in serious need of a clear head.