MUET’s art and design alumni give a sneak peek into their minds
By Our Correspondent
Published: March 1, 2015
Tweet Email 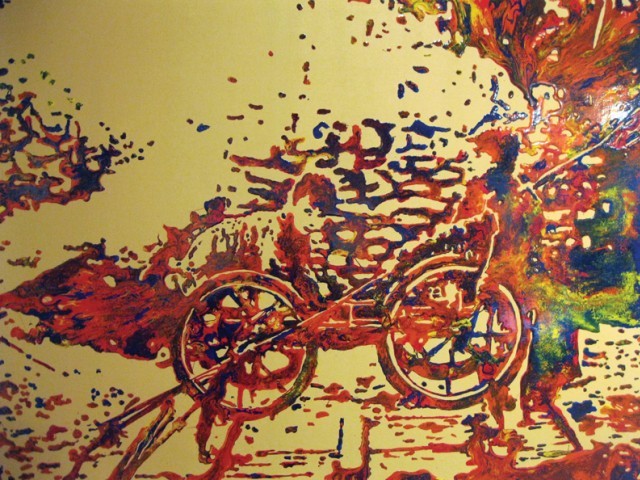 The above painting by Bakhtawer Mahar is part of the artwork by 50 fine arts graduates and alumni of the Centre of Excellence in Art and Design MUET, Jamshoro, who have put on display their unique way of thinking at the exhibition, titled ‘1st Dot’. PHOTO: COURTESY IVS GALLERY

KARACHI: If you want to see the world through the eyes of students, make sure you check out ‘1st Dot’, an exhibition at the Indus Valley School gallery.

Around 50 fine arts graduates and alumni of the Centre of Excellence in Art and Design (CEAD) at the Mehran University of Engineering and Technology (MUET), Jamshoro, have put on display their unique way of thinking. The exhibition will continue till March 4.

Using miniatures, installations and canvases as different forms, these young artists have exhibited their memories and not-so-extraordinary everyday experiences and perception in a very distinctive manner.

Rabia Rabail has captured the daily walk from her house to the university’s shuttle stop. “I come across multitudes of buildings, which I have overlapped into one on my canvas,” she explained. On her canvas, she has made extensive use of mediums, such as enamel, colour pencils and oil, uses primary colours to give it a happier, childlike appearance.

The adventurous and fun side of the young graduates is evident from the level of experimentation they have done on their thesis work. A white canvas reveals black lines, appearing at times in definite and not-so-definite patterns. The artist, Rukhsar, explained that she had fitted black markers at the bottom of toy cars and used a remote control to make them go up and down the canvas.

“Fine arts involve a lot of manual work,” she pointed out. “Since humans are machine-dependent, my work has used a machine as a means of expressing art.” In her previous works, she used roller skates dipped in paint and ran in person on the canvas.

But not all displays were this fun. Artist Sundeep Kumar, who hails from Tharparkar, used coins as they hold a lot of significance to his childhood. Kumar recalled that he was enrolled in a Tharparkar school in the year 1997 and, like every other child, he was given a Rs2 coin as a reward every day he spent in school.

Another coin in his collection has a blood-soaked shoe of a young girl, which went viral on social media in the wake of the attack on Peshawar’s Army Public School. For Kumar, money is the root of all the violence in Pakistan. “It’s apparent that money is the only concern of the government,” he said.