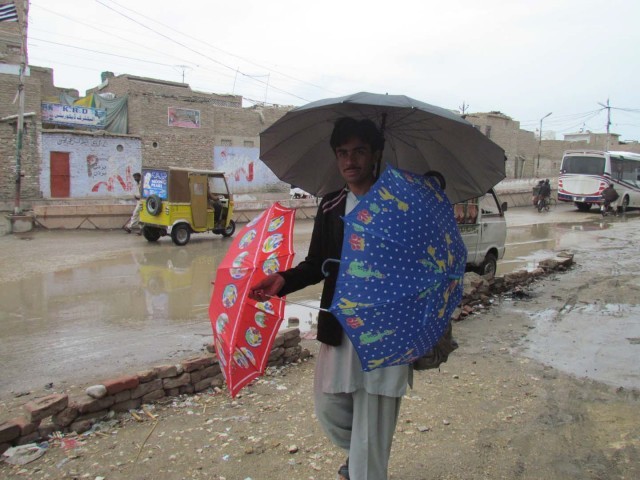 A man in sukkur sells umbrellas after a rainfall in the city on Sunday, March 1, 2015. PHOTO: NAEEM AHMED GHOURI/EXPRESS

SUKKUR: Winter showers and strong winds lashed upper Sindh on Saturday night, killing a child in Kando Bakhrani village, disrupting the power supply to 325 feeders and leaving residents in the dark for over 15 hours.

Heavy rain and strong gusts of wind turned the weather chilly again on Saturday night, continuing intermittently till Sunday morning. In Sukkur, the power supply was disrupted soon after the rainfall began and remained suspended throughout the night. Meanwhile, the wind uprooted trees and signboards as well as snapping many conductors, leading to the tripping of various feeders, according to Sukkur Electricity Power Company (Sepco) officials.

Meanwhile, reports from Kandhkot said that five-year-old Nazir Ahmed was crushed to death after a wall collapsed at his house in Kando Bakhrani village near Tangwani.

Showers were experienced in Sukkur, Rohri, Pannu Aqil, Ghotki, Mirpur Mathelo, Daharki, Ubauro and other areas, while there were light to medium showers in places including Khairpur, Naushero Feroze, Larkana, Qambar-Shahdadkot Jacobabad and Kashmore-Kandhkot.

The recent rainfall has also damaged the standing wheat crop in Ghokti district and is likely to prove disastrous if it continues. The light drizzle in Jacobabad, Kashmore, Kandhkot, Shikarpur and Larkana has so far not affected the wheat crop, which is normally ready by the end of March, but heavy showers could have an adverse effect.

As far as the power supply is concerned, a Power Dispatch Centre, Sukkur, official said that 325 Sepco feeders had tripped due to Saturday’s rain. Only 23 feeders could be restored by early Sunday morning.

Old Sukkur subdivisional officer Israr Bajkani told The Express Tribune that the conductors snapped due to the strong winds. “Officials are busy in repair work but a smooth supply of electricity is not possible if the rain continues.”

Sepco spokesperson Noor Ahmed Soomro said that 200 feeders had been restored while efforts were underway to restore the remaining feeders.