A lot of people do not know that eating with hands has a number of surpri­sing health benefi­ts
By Umnia Shahid
Published: February 18, 2015
Tweet Email 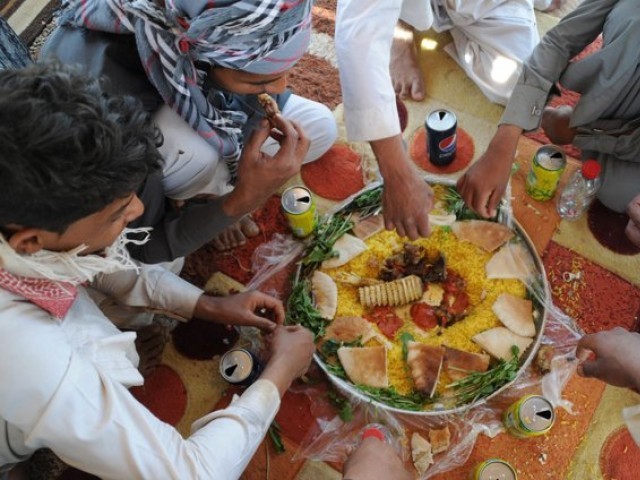 Numerous Pakistanis eat with their hands. However, as we adopt more traditions of the western world, it is common to see people using spoons and forks to eat all the time. A lot of people, though, do not know that eating with the hands has a number of surprising health benefits. As compiled by theprimalist.com, Daily Mail and usnews.com, discover the reasons why you should ditch cutlery today.

A new study published in the journal Clinical Nutrition found that people with type 2 diabetes were more likely to be fast eaters that used cutlery to eat, as compared to people without the condition. Eating with forks and spoons correlates with faster eating, which has been linked to blood-sugar imbalances in the body — contributing to the development of type 2 diabetes. If you suspect that you may be eating too quickly, ditch utensils and focus on your eating style — consciously slow it down and see how you feel. You may be surprised by how soon you get full with less food if you eat with your hands.

We have some bacteria, known as normal flora, found on the palm and fingers of the hand. It is not harmful to humans, it in fact protects us from many damaging microbes in the environment. When you eat with your hands, the flora in the fingers is swallowed. It is beneficial for health and for various body parts such as the mouth, throat, and intestine, and it promotes healthy digestion in the gut. Handling food with your fingers releases digestive juices and enzymes. Also, millions of nerve endings in your fingers relay the message that you’re about to eat, including the temperature of the food, level of spiciness and texture of food, thereby prepping the stomach for digestion.

Binge eating is becoming a concern with more adults, but it can also occur in childhood. Binge eating seems to be related to the vicious cycle of restrictive dieting followed by a loss of control around food, and it contributes to further health problems. A study published in the Journal of Consulting and Clinical Psychology showed that families who ate by hand were more in touch with eating concepts, such as eating only when hungry and paying attention to fullness cues. The study found that parents were able to help their 8 to 12-year-old overweight children cut down on binge eating episodes by training them to eat by hand.

4) It can help decrease overeating at restaurants

People worldwide spend about 40% of their food budget on dining out. These meals tend to be higher in overall calories, raising concern that this practice is increasing our national waistline. While many health professionals advise people to try and cook more at home, one study showed that watchful eating at restaurants might help. The researchers found that middle-aged women who ate out and used their hands to pick on appetizers and dry food entrées at least three times a week were heedful while eating. This approach helped them reduce acid influx issues while still enjoying restaurant meals minus the feeling of heaviness.

Researchers studied over 1,600 middle-aged women in New Zealand found that those women who ate in response to hunger were more likely to be at a healthy weight than women who paid no mind to hunger cues when they ate. Many people multi-task while eating lunch, but two studies published in the journal Appetite found that when people ate by hand while simultaneously reading a newspaper or watching TV, they were less hungry at snack-time, and opted for a smaller snack. Researchers concluded that eating by hand promotes a sense of fullness and satiety as compared to eating with utensils.