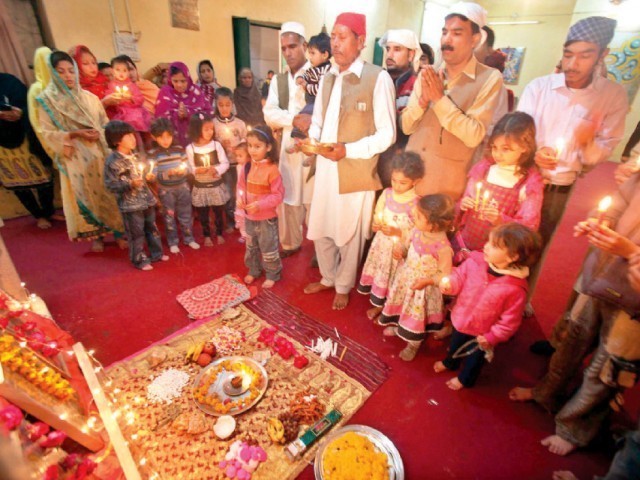 Devotees fast during the day and hold vigils during the night for the auspicious event.

PESHAWAR: The Maha Shivratri Festival has begun at Dargah Pir Ratan Nath in Karimpura Bazaar. The Night of Lord Shiv is celebrated as a tribute to his marriage with goddess Parvati.

Adherents of the Hindu faith arrived in the provincial capital from various parts of K-P to participate in the rituals. Talking to The Express Tribune, All Pakistan Hindu Rights Movement (APHRM) Chairman Haroon Sarbdiyal said Shivratri is the 14th night of Phalgun in the Hindu calendar. “Fasting and praying to Lord Shiva during Shivratri brings good fortune,” he said.

The APHRM chairman said security concerns have restricted the scale of festivities. “We now celebrate Shivratri on the district level,” he said. Sarbdiyal added it has been several years since Indian yatris [pilgrims] stopped arriving for the three-day event. “It is not just security. The visa processes are not fluid and accommodating,” Sarbdiyal said, citing the growing number of visa refusals over the years. “Our community needs the government’s support to practice the faith freely.”

Pandit Ashok Kumar told The Express Tribune the major worship services in Pakistan are conducted at the historic Katas Raj temple in Chakwal, Punjab, and the Shiv temple in Mansehra. “The Night of Lord Shiv is better than a million nights,” he said.

Kumar said the festival is the highlight of the Hindu religion and millions of Lord Shiva’s followers celebrate it with great fervour. “We fast, wear new clothes, wash the Shiva Lingam with milk, honey and water,” he explained. The lingam is an idol or symbol representing Lord Shiva.