'We wouldn't be the same withou­t the Jewish commun­ity in Denmar­k', says Danish PM
By AFP
Published: February 16, 2015
Tweet Email 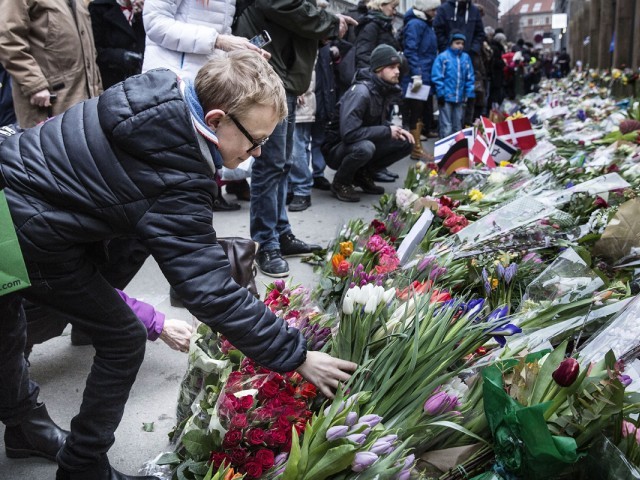 COPENHAGEN: Danish Jews on Monday turned down an offer by Israeli Prime Minister Benjamin Netanyahu to emigrate to Israel following a deadly weekend attack on a synagogue in Copenhagen.

“We’re very grateful for Netanyahu’s concern but having said that, we are Danish — we’re Danish Jews but we’re Danish — and it won’t be terror that makes us go to Israel,” said a spokesperson for the Jewish Community in Denmark, Jeppe Juhl.

“So we understand his concern for our well-being, and we value his concern but we are Danish and we’re staying in Denmark. If we move to Israel it’s for other reasons,” he told AFP.

‘We wouldn’t be the same without the Jewish community’

Danish Prime Minister Helle Thorning-Schmidt advised Danish Jews not to emigrate Monday despite a call from her Israeli counterpart Benjamin Netanyahu for European Jews to move to Israel.

Netanyahu on Sunday urged European Jews to move to Israel after a Jewish man was killed outside Copenhagen’s main synagogue in one of two attacks in the city at the weekend.

“Israel is your home. We are preparing and calling for the absorption of mass immigration from Europe,” Netanyahu said in a statement, repeating a similar call after attacks by militants in Paris last month that killed 17 people including four Jews.

Danish intelligence said the gunman who opened fire outside the synagogue and a cultural centre may have been inspired by last month’s Paris attacks.

Two policemen who were injured outside the synagogue had been posted there after community leaders contacted authorities following Saturday’s shooting at the community centre that left one person dead.

Around 8,000 Jews live in Denmark, most of them in Copenhagen and with smaller communities in the cities of Aarhus and Odense, according to the Jewish Community of Denmark.

During the Gaza conflict in August, Copenhagen’s Jewish school, Carolineskolen, had its windows smashed and anti-Jewish graffiti spray-painted on its walls.

The incident took place shortly after a rise in anti-Semitic crimes in Denmark prompted politicians to organise a “kippah march” in Copenhagen in support of Jewish people’s right to display their religion openly.

Indian man dies after being rammed by millionaire’s car