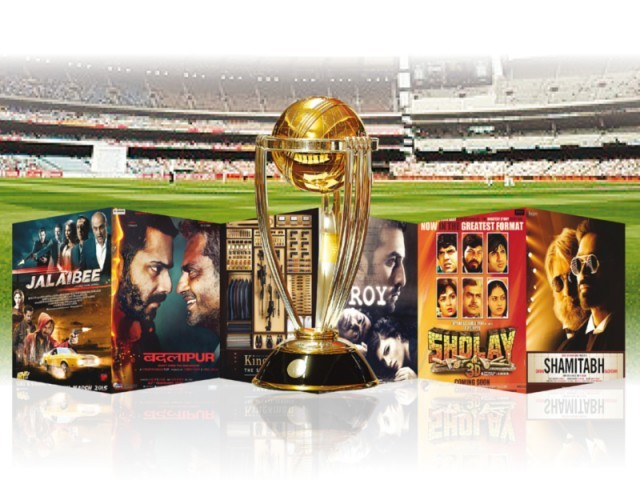 Although cricket and cinema have co-existed peacefully since the emergence of multiplexes in the country over the past four years, the World Cup could be a gauge of of the new-and-improved Pakistani cinema’s resilience. Speaking to The Express Tribune about the commercial prospects of Pakistani cinema during the world tournament, cinema owners share the belief that box-office return of films releasing in this month-and-a-half-long window may suffer.

Nadeem Mandviwalla, owner and managing director of Mandviwalla Entertainment and Atrium Cinemas, said that despite this probability, he expects cinemas to do “better business” than they did in 2011. He cited the timings of the matches as the reason for this, stating that this time around, all the games would be televised around 6:00am and 8:00am and finish by 4:00pm (PST). “Unlike last time, there are no matches being held at primetime or post-4:00pm,” he commented.

Although Hashim Raza, CEO of Cinepax Cinemas, holds that the films will generate relatively better business, he feels, “The World Cup will affect the cinema turnout, as it is going to cut the audiences during the first half of the business day.” Mandviwalla added that there is a chance the matches may work against cinemas because people tend to have a set “entertainment quotient” for each day. He said people would not seek an alternative leisure activity after watching a long cricket match as it may result in entertainment overdose.

The two ‘Cs’ in retrospect

During the last One Day International (ODI) in 2011, Pakistani cinema was still finding ground with only a handful of multiplexes, such as Atrium Cinemas, Cineplex and Cinepax (Rawalpindi), in place at the time. According to Mandviwalla, a prime reason why the box-office draw was affected four years ago was due to a film producers’ strike in India, which led to no major Bollywood films being imported in the country.

A closer look at the occupancy rate of cinemas and film schedules revealed that Pakistan’s inspired run till the semi-finals of the last ODI had an inverse relationship with cinema occupancy. The occupancy rate at Atrium Cinemas, which began at 28.35 per cent during the first week of the tournament, was only half— 14.36 per cent — when the tournament entered into its final week.

Despite this trend, producers are unwilling to compare the situation to that of Ramazan-window. “Nowadays, multiplexes are doing good business in Ramazan, as it is falling in the summer and all the major film releases take place during that time,” noted Mandviwalla. “Movies, such as Roy, Badlapur and Shamitabh, are being released close to or during the World Cup, as producers know that audiences will come to watch these movies.”

What this augurs for Pakistani cinema

Another interesting aspect to the World-Cup window is that not only will it see the release of notable Bollywood films but also the highly-anticipated Pakistani crime-caper film Jalaibee. Yasir Jaswal, the film’s director, talked about how the producers’ decision to release the film on March 20, towards the business-end of the tournament, had more logic than risk involved in it.

“It would be a long weekend due to the public holiday on March 23, and the day we lose a match, we would eventually gain from the holiday,” said Jaswal. “There would also be only a handful of matches left after that, and Pakistan won’t be playing in all of them,” he added.

On whether a poor showing by Pakistan in the World Cup may augur well for the box office, Jaswal said, “It can go both ways because, God forbid, if Pakistan crashes out of the tournament in the early stages, then people may feel low and not want to watch films.”

Actor Ali Safina, who is part of the film’s ensemble cast, quipped that, as much as he wants the Pakistani team to succeed in the tournament, given their current performance, “the cinema team may be a little stronger than the cricket team.”