‘Breaki­ng Bad’ preque­l goes on air, explor­es the life of the lawyer-con artist before the events of the crime drama.
By News Desk
Published: February 9, 2015
Tweet Email 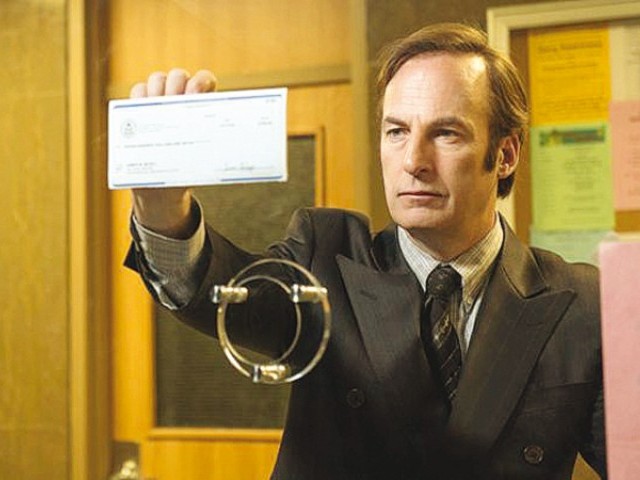 Several cast members of the Breaking Bad series would appear in the series, including Jonathan Banks. PHOTO: PUBLICITY

Breaking Bad’s prequel-sequel Better Call Saul premiered on February 8. The show, which is a spin-off to the commercially and critically-acclaimed TV series, tells the story of lawyer Saul Goodman (Bob Odenkirk) six years before he meets Walter White (Brian Cranston), reported rollingstone.com. The pilot episode for the show has been written and directed by Better Call Saul and Breaking Bad creator Vince Gilligan.

According to the wrap.com, the show, which is being televised on AMC, was green-lit in July 2013 during the final season of Breaking Bad. Better Call Saul explores the life of Goodman, a con artist, formerly known as Jimmy McGill, before the events of Breaking Bad and how he ends up working behind the counter of a shopping mall Cinnabon in Omaha, Nebraska.

Several cast members of the Breaking Bad series would appear in the series, including Jonathan Banks, who played the role of Mike Ehrmantraut in the series. Titled Uno, the first episode of the show has received critical acclaim so far. It has included multiple elements of the earlier show, such as its signature time jumps.

Gilligan stated that, despite the show being a Breaking Bad spin-off, the team doesn’t want that to be the show’s selling point, reported nydailynews.com. “We really want this to stand on its own,” said the show’s co-creator Peter Gould. “Walter White and Jesse Pinkman (Aaron Paul) do not appear in season one.” However, he didn’t rule out the possibility of the characters returning later on in the show, saying, “Everything else is on the table.”

Show creator Vince Gilligan spoke to the Hollywood Reporter about his excitement surrounding the series’ premiere and said that he is more nervous about the show’s premiere, although Breaking Bad’s final run in 2013 had been quite nerve-racking. “I’m nervous as hell and my anxiety grows day by day,” said Gilligan, reasoning that the expectations were lower when Breaking Bad had premiered seven years ago in 2008. The second episode of the show, Mijo, will air on February 9.

‘I Am Malala’ bags Grammy Award