The quest for Pakistan’s lost identity

The quest for Pakistan’s lost identity

There is an ever-wideni­ng inform­ation gap among young people today which has result­ed in an identi­ty crisis­
By Taha Kehar
Published: February 8, 2015
Tweet Email 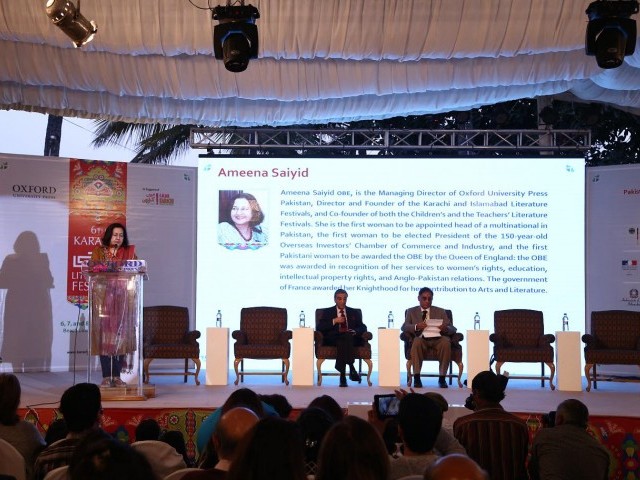 There is an ever-widening information gap among young people today which has resulted in an identity crisis. PHOTO: RASHID AJMERI/EXPRESS

Any discourse on Pakistan’s national identity is inextricably linked with our notions of its history.

This was said during a conversation between veteran lawyer Aitzaz Ahsan and historian Hamida Khuhro on the third day of the sixth Karachi Literature Festival on Sunday. During the session, the significance of rewriting history to allow room for a more realistic portrayal of the country’s roots was the fulcrum of debate.

“The manner in which history is taught is deplorable,” said Ahsan. “Children are taught to trace the history of the subcontinent to the advent of Islam. However, they don’t have the basic knowledge about the civilisations that ruled Sindh before Muhammad bin Qasim conquered the province.”

According to Khuhro, there is an ever-widening information gap among young people today which has resulted in an identity crisis. “Unfortunately, they don’t realise it as they have been heavily influenced by glaring deficiencies in our education system,” she said.

Ahsan emphasised on the need to eliminate this identity crisis through a constructive debate. “For many years after Partition, little was known about Pakistan’s identity,” he said. “It was viewed as a recent breakaway from India, which did not have a history of its own. This would puzzle me as a young student and I delved deeper into the subject.”

According to Ahsan, his book, Indus Saga, which has recently been translated into Urdu under the title Sindh Sagar aur Qayam-e-Pakistan is a product of his discovery of Pakistan’s history and identity.

“I have tried to show that the identity of a person from the Indus region is fundamentally different from an Arab or an Indian,” he said. “In fact, the country’s diversity is its claim to unity.”

Ahsan also urged experts to challenge and eliminate myths about the subcontinent that have seeped into our history books. “More often than not, the notion of a conspiracy and superstition has overshadowed our notion of history,” he said. “We need to realise that wars weren’t lost because the so-called dark forces were against us.”

Khuhro voiced her concern over this trend and insisted that a cohesive solution should be sought. “At one point in time, people from the subcontinent were receptive to knowledge and education,” she said. “But after our encounter with British colonialism, we started rejecting everything that represents modernity.”

In order to counter this problem, Khuhro suggested that the internet could help people break away from superstition and rediscover their national identity. However, Ahsan insisted the medium would have no tangible effect on the status quo as long as senseless bans continue to be imposed on accessing websites.