Gear up for ‘plan B and C’ of NADRA workers’ union

Gear up for ‘plan B and C’ of NADRA workers’ union

Newly appoin­ted chief of NADRA, Usman Mobin, said that he ‘will be in a positi­on to give commen­ts next week’
By Our Correspondent
Published: February 7, 2015
Tweet Email 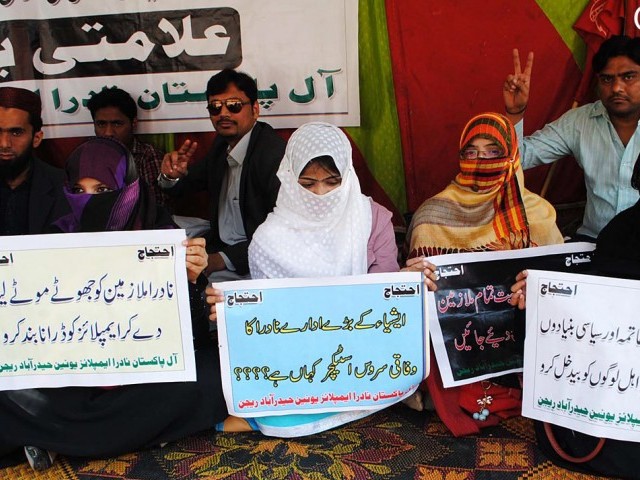 Relatives of Nadra employees and members of the All Pakistan Nadra Employees Association protest in Hyderabad on Friday. PHOTO: ONLINE

Is your Computerised National Identity Card (CNIC) about to expire? You might want to hurry up as the workers’ union of the National Database Registration Authority (NADRA) is all set to board the trains in March towards NADRA headquarters in Islamabad if the government does not redress their issues.

Members of the All Pakistan NADRA Employees Union (APNEU) were on their third day of hunger strike on Friday. APNEU general secretary Salman Zuberi told The Express Tribune that the workers have warned the government to look into their issues or else they would go for a complete shutdown. He said that the hunger strike camp set up outside Karachi Press Club was part of their ‘plan A’. “In plan B, we will march towards the NADRA headquarters in Islamabad and plan C would be the complete shutdown of our offices.”

He added that the protests were simultaneously being held in front of press clubs in Hyderabad, Lahore, Peshawar, Quetta and Sukkur and the employees of Lahore and Sukkur have been served show-cause notices.

APNEU vice-president Syed Noman Anwar, hanging an enlarged NIC on his shoulders, said that we provide identity to the nation. “And there is no one to pay heed to our sorrows,” he said. “When I joined NADRA, I had Intermediate level education with no experience. Now with two Master’s degrees and 12 years of experience, I am still on the same post.”

According to him, there was no medical allowance for them. He lamented that the son quota has not been in practice for the last eight years.

NADRA Sindh director-general Zahid Hussain refused to comment. The newly appointed chief of NADRA, Usman Mobin, said that he ‘will be in a position to give comments next week’.

A strange blessing: Natural sweepers of a dirty city