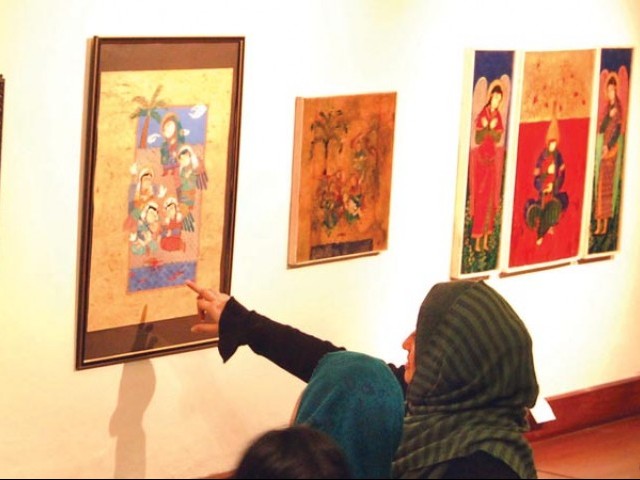 ISLAMABAD: The Iranian embassy in collaboration with the Pakistan National Council of Arts (PNCA) inaugurated a five-day arts exhibition here on Friday to commemorate the 36th anniversary of the Iran’s Islamic revolution.

On the first day, majestic traditional Iranian music echoed in the halls of the PNCA to welcome a large number people including students to learn about the Islamic revolution.

As lights dimmed, a documentary was screened depicting the Iranian culture and religion. Handmade rugs and Iranian printed table clothes were spread across tables as a base for handicrafts on display. Shiny silver produces embellished with gems demanded attention. The ravishing pieces were set for display, highlighting the alluring rich culture of Iran.

Two artists sat with their tools, demonstrating delicate paint on ceramics, charming traditional royal blue and white pottery were accompanied by red on beige. A winsome collection on display also allured the audience who visited to the exhibit. Adding to this, a large glass boxes placed in the centre of the room cases books with poetry that are 200 to almost 500 years old. The collection is from the Iranian Museum in Islamabad, but has been moved to the PNCA for more people to witness and learn about Iran.

Speaking to The Express Tribune, Adeela Keshavirz, cultural counsellor at the Iranian Embassy, said that Pakistan and Iran shared history and culture and it was important for people to learn through colour and culture. “The awe-inspiring collection of these crafts is what will bind people closer and create an interest in them to learn more” she said.

“I see so much of Pakistan in this art. The similarity in patterns and motifs on handicrafts reassure the similarities between the two,” said Karimullah who was visiting the exhibit. “The historical Islamic influence is evident in their work, the same way it is in ours,” Karim added. The exhibition is ongoing for five days at the PNCA.