Car theft: A car a day is the minimum quota

Car theft: A car a day is the minimum quota 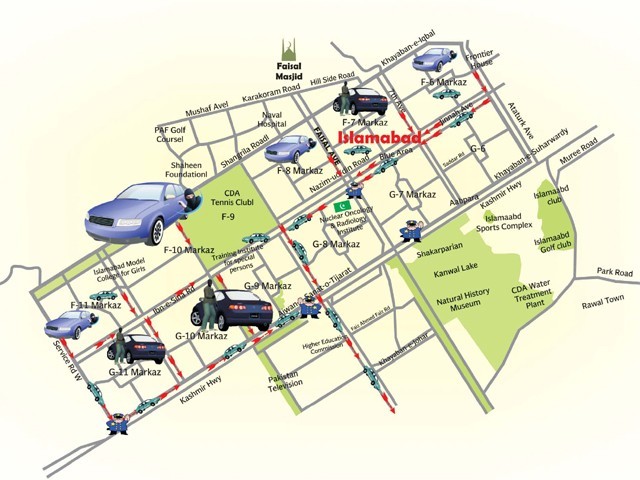 Most of the carjackers prefer to use 9th Avenue to exit the city through IJ Principle Road in order to avoid police checks.

ISLAMABAD: More than a car a day is now the minimum standard quota for the city’s car thieves. Their tally for this year is 400 so far, the figure slumping slightly to 30 for October and November’s first week.

Police records put the number of cars stolen  from Islamabad last year at 373, which the thieves have surpassed even before the year’s end.

Suzuki Mehran, Alto, Bolan, Toyota Xli and Altis are the carjackers’ favourites, while their preferred hunting ground covers all F-sectors, G-9/10/11 and the Industrial area.

The activity has picked up in the last quarter when as many as four to five cars have been stolen in a single day.

This has forced the city police to take extraordinary measures, like increasing the number of hold-ups and barriers at more than 30 points along the entrance and exit roads to the city.

Moreover, 28 police cars and 12 Rescue 15 Falcons were specially deputed to check the crime but the incidence fell only when the Margalla and Shalimar police were able to bust two gangs of carjackers.

One of them was caught at a police check point on Kashmir Highway opposite the FIA office which the car thief, Naseer Hussain Shah used to cross to get to the IJ Principle Road. From there, the stolen car was dispatched to Azad Jammu and Kashmir (AJK), said a police officer of the Margalla Police station.

A specialist in stealing Suzuki Mehran cars, Shah was paid Rs26,000 by the dealers in AJK.

He claimed he was not a professional thief but was committing the crime to pay for the treatment of his mother who was suffering from cancer.

The second gang of carjackers was more professional and notorious. They were known for lifting Toyota Corolla Xli cars from inside residences. Two members of this gang were arrested with the help of a cell phone which one of them had left in a car they had had to abandon in the parking lot of a hospital.

The gang was very well-organised. They would rent a room in a guest house, survey the scene, select the target, and strike when all was safe. They would then park the stolen vehicle at some safe place for the night, like the parking lot of the Pakistan Institute of Medical Sciences. Next morning they would take it to Mardan for its disposal.

Peshawar and Mardan have become the preferred markets for stolen cars following the start of army action in the tribal belt. The cars are disassembled there and parts are then sold to auto parts dealers. Toyota Corolla Xli, Suzuki Mehran and Bolan remain in high demand.

No security gadget is fool proof. The carjackers have developed techniques to break into every alarm and tracking system and they can break or open all types of locks.

Though many tracking companies claim their trackers cannot be jammed with the help of GSM signals, the thieves have so far proved them wrong.

Police believe that unless the black market business of stolen cars was shut down and police in Peshawar and Mardan catch the dealers who run this business, there was little hope for the menace of carjacking to be checked.