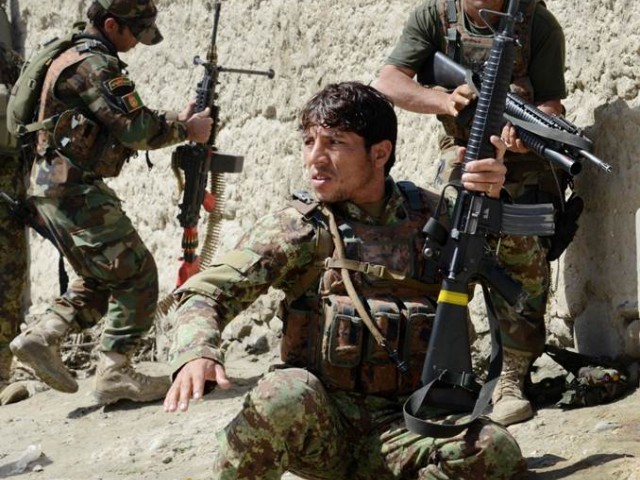 In this photograph taken on March 19, 2014, Afghan soldiers from the 4th Brigade, 201 Army Corps of the Afghan National Army (ANA) take positions behind an adobe wall after being fired upon by insurgents during an operation in Khogyani District. PHOTO: AFP

Some 200 local and foreign militants have been killed in a military operation in the northeastern Afghan province of Kunar where Pakistani officials believe fugitive commander of Tehreek-e-Taliban Pakistan (TTP) Mullah Fazlullah and his loyalists maintain sanctuaries, Afghanistan’s top diplomat in Pakistan said on Saturday.

“This is a proof that we believe terrorists are terrorists. There is no difference between good terrorists or bad terrorists,” Janan Mosazai, Afghanistan’s Ambassador to Pakistan, told journalists at the Afghan Consulate in Karachi on Saturday.

Mullah Fazlullah claimed responsibility for the methodical killing of over 150 people, mostly students, at the Army Public School (APS) in Peshawar on December 16. Pakistani military officials shared credible evidence with their Afghan counterparts that the handlers of the APS attackers were hiding in Afghanistan.

The frosty relations between Pakistan and Afghanistan began to thaw since the installation of a new unity government in Kabul, led by President Ashraf Ghani. The new Afghan leader visited Islamabad in November and said his administration believed in improving relations with Pakistan.

Ambassador Mosazai said his country was focusing on deepening state-to-state relations with Pakistan, and the two countries were also sharing intelligence to curb terrorism. He added that terrorism was the common enemy of both countries. “Terrorists have no nationality or religion. They are non-state actors,” he said, calling Pakistan and Afghanistan the biggest sufferers of the ‘war on terror’.

Following the APS massacre, the Khyber-Pakhtunkhwa government announced plans to repatriate hundreds of thousands of Afghan refugees living illegally in the province.  Ambassador Mosazai, however, clarified that Islamabad has assured that the repatriation of registered Afghan refugees would be “voluntary, dignified and gradual”.

“We are looking into reports of forced evictions but we have been assured by the Pakistani authorities that it would not happen,” he said. Sharing UNHCR figures, he said there were 1.6 million registered Afghan refugees in Pakistan, of which Sindh was hosting 65,000.

Ambassador Mosazai ruled out the involvement of Afghan refugees in major crimes. “There has been not a single major incident of crime or terrorism in Pakistan where Afghan refugees were involved or implicated,” he added. “For the past 35 years, Afghan refugees have lived in dignity and harmony in Pakistan, and there have been intermarriages and relationships.”

During his first visit to Karachi, Ambassador Mosazai met the Sindh chief minister, as well as MQM leaders at Nine Zero. He also visited the Baqai Medical University where Afghan students are studying on scholarships provided by the Pakistani government.