Say Muslim values and custom­s should be respec­ted.
By Our Correspondent
Published: January 23, 2015
Tweet Email 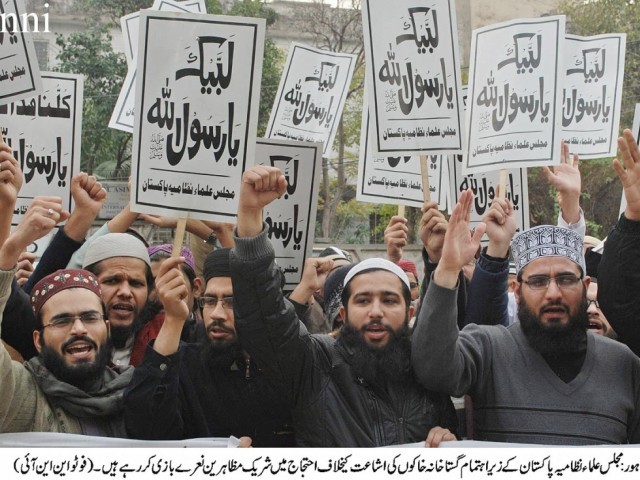 Participants of the rally walked from Zila Council Chowk to Aminpur Bazaar where they staged a sit-in. They were carrying banners and placards inscribed with slogans.

“The world should know that Muslims will not hesitate to sacrifice their lives for Prophet Muhammad (peace be upon him),” he said.

He said by publishing blasphemous caricatures, editors of the magazine had hurt the sentiments of Muslims all over the world.

He said the men who attacked the magazine were neither Pakistanis nor had they obtained religious education from Pakistani madrassahs.

“With great freedom comes great responsibility,” he said. “Freedom of expression does not mean one should hurt the sentiments of billions of Muslims across the world by insulting a man they hold so dear,” he said.

Akram said the emerging right-wing tendencies in Europe were alarming. He said European leaders should take responsibility of their Muslim populations, as they did with Jews and Christians.

“European leaders should take steps to reassure the Muslim populations in Europe that they would not be discriminated against on the basis of religion,” he said.

“European leaders should recognise the message they send to the Muslim community when they stand by such publications in the name of freedom,” he said.

Akram said the role of Muslims in shaping modern Europe could not be denied.

“Germany, the country that is holding up the European Union, rebounded after the World War II due to an influx of Turkish immigrants,” he said.

He said Muslims were now an important part of the European society and their customs and values should be respected.

“Freedom of speech is a wonderful tradition,” he said. “But by using it for hateful purposes, some misguided people will lead the world into a clash of civilisations.”

“We condemn blasphemy and Charlie Hebdo,” he added. He said non-Muslims should respect the sentiments of Muslims and avoid committing blasphemy.

The protesters chanted slogans against the US, UK, Israel and France. They carried placards inscribed with ‘Down with Charlie Hebdo’.