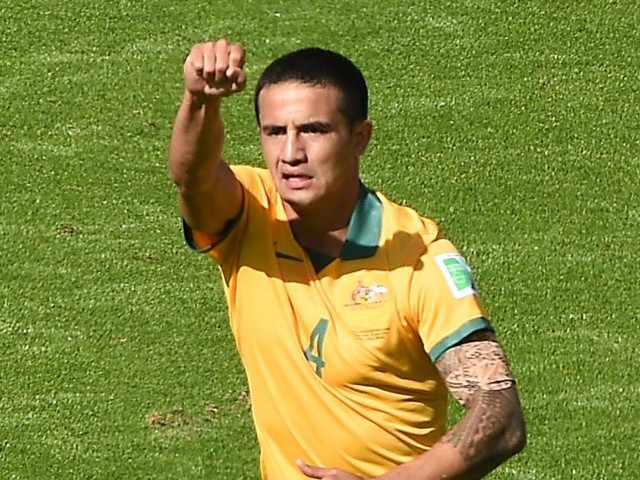 The ex-Premier League striker, who retains his goal-scoring knack at 35, will lead the Socceroos against Oman in Sydney today in the absence of injured skipper Mile Jedinak. PHOTO: AFP

SYDNEY: Tim Cahill yesterday called it a ‘massive honour’ to captain Australia in his home city but he promised to leave emotions aside with an Asian Cup quarter-final spot on the line.

The ex-Premier League striker, who retains his goal-scoring knack at 35, will lead the Socceroos against Oman in Sydney today in the absence of injured skipper Mile Jedinak.

But the Sydney native said he would not let the occasion get to him as Australia seek the victory that could put them into the last eight, and three wins from the title.

“It’s amazing, I love playing for Australia regardless of which country I’m in but to play at home, in front of my hometown fans and obviously family and friends is very special,” Cahill told reporters.

“But with me, not a lot of emotion comes into it when I cross that white line.”

Australia will guarantee their place in the knockout stages today if they win and South Korea defeat Kuwait earlier in the day.

South Korea coach Uli Stielike yesterday urged his players to find a killer touch against defence-minded Kuwait as they look to secure their place in the quarter-finals.

The Taeguk Warriors are far from prolific and they only defeated Oman 1-0 on Saturday despite dominating possession in their opening Group A clash.

Japan cruise to 4-0 win over Palestine

Defending champions Japan thrashed Palestine 4-0 in their Asian Cup opener yesterday, giving them the perfect start in their quest for a fifth title.

The Blue Samurai, who won the tournament for a record fourth time in 2011, needed only eight minutes to take the lead against a Palestine team making their first appearance in Asia’s showcase competition.

Meanwhile, a brilliant individual goal from Iraq midfielder Yaser Kasim was the difference as the 2007 champions opened their Asian Cup campaign with a 1-0 win over Jordan yesterday.
Like Sports on Facebook, follow @ETribuneSports on Twitter to stay informed and join in the conversation.

Farewell skipper: Misbah to get his official sending off