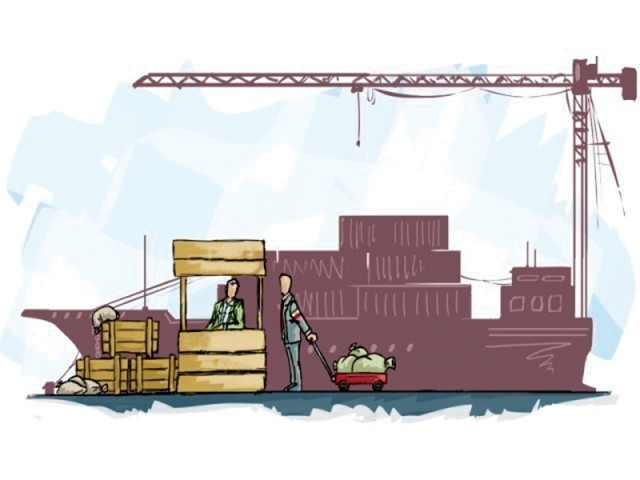 It was not supposed to have been this way. After the European Union granted GSP Plus Status to Pakistan, our exports were supposed to have risen sharply, yet instead, Pakistan’s sale of goods to the outside world have gone down by 4.3% during the first half of fiscal 2015. What is happening? What is causing this decline in exports?

There are three possible explanations for the slowdown in exports. The first is that Pakistan’s major export markets – the United States, the European Union, China and the Middle East – are experiencing an economic slowdown. The second is that the energy crisis is causing exporters to struggle to meet the demand from importers. And the third possible explanation is idiosyncratic factors that are not connected to systemic issues.

The first possibility – a slowdown in Pakistan’s export partners’ economic growth – is a double-edged sword. On one hand, it means that the decline in Pakistan’s exports is not the fault of our industries, but on the other hand, it also means that there is nothing to be done but wait for economic conditions in our export markets to improve. So is this happening? A look at the data released by the Pakistan Bureau of Statistics suggests that this is only a partial explanation.

Of the four major regions to which Pakistan exports, two are regions experiencing a slowdown in economic growth: China and the European Union. The data shows a mixed picture. During the period through August 2014 (the latest month for which data by country is available) Pakistan’s exports to the European Union increased by 5.8%, while exports to China declined by 30.8%. The GSP Plus status that Pakistan was granted by the EU clearly seems to be working: despite the slowdown in European economic growth, Pakistan’s exports to the region are rising. Meanwhile, China’s economic torpor is making its presence felt sharply on Pakistani exporters’ financial health.

The explanation favoured by many in the textile lobby is that the energy crisis, particularly in Punjab, has significantly reduced the industry’s production capacity and caused a decline in exports. There is at least some evidence to support this hypothesis. In the five months between July and November 2014 (the latest for which data by commodity group is available), textile exports rose by just under 1% in value. However, a look at the quantity suggests that the picture was far from rosy.

Exports of raw cotton and cotton yarn are down 2% and 1% respectively compared to the same period in the previous year. For cotton cloth, the picture is even worse: export quantities are down 32.6% compared to the same period last year. However, towels, knitwear and bedwear exports are all up both in quantity and dollar value exported, suggesting that those further up the value chain are more immune to energy-related issues than those who produce more basic commoditised products.

The energy crisis is no doubt a severe impediment to several companies, but it hits the relatively inefficient spinning and weaving industries within the textile sector far worse than it affects the composite textile sector. Textile exports are largely flat, mainly due to higher prices this year compared to last, but the data suggests that Pakistani exports could have been much higher had the export mix been more skewed towards value-added products.

The final explanation, meanwhile, is the more complicated one: idiosyncratic changes in the environment in many different industries that happen to be affecting exports. The data does seem to support this hypothesis. Of the four major export categories used by the PBS – food, textiles, petroleum, and other manufactured goods – it is the last category that has seen a sharp 18.4% decline in value of exports, from $2 billion to $1.65 billion.

Jewellery exports have virtually collapsed, from over $200 million during July-November 2013 to less than $4 million during the same period in 2014. Leather exports, as well as chemical exports are down substantially, for reasons that have more to do with the specific circumstances in those industries than the broader Pakistani macroeconomy.

In short, the picture on trade – and therefore the policy requirement – is complex. Yes, the government could help a lot by fixing the energy crisis that would let more companies in more industries produce and export and full capacity. But the government would also do well to focus on more industries than just the politically powerful textile lobby.

Harassing one, facilitating the other