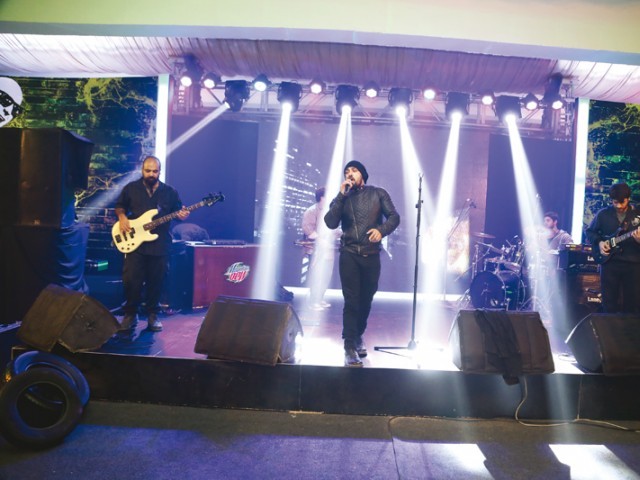 Umair Jaswal performed a number of his most famous tracks, such as Charkha Nolakha, Sawaal and Inquilaab, to a charged crowd. PHOTOS: PUBLICITY

Mountain Dew recently launched its neon bottle at an event held at Area 51, which boasted performances by notable Pakistani musicians. The new line of bottles was unveiled via 3D projections. The event, which featured a skateboard ramp, motorbikes, graffiti wall and a Mountain Dew bar, captured the essence of the brand and its youthful, edgy vibe.

Speaking to the press on the occasion, Maliha Subhani, marketing director of PepsiCo, said, “Mountain Dew is a brand that can’t be put in a box. It instigates originality and refuses to follow. It inspires by leading.” She added that the neon bottle is one-of-a-kind and encapsulates the philosophy behind the brand.

Subhani’s opening address was followed by a Mountain Dew television commercial, specifically made for the neon bottles. After the video presentation and 3D projection, guests and audience members were directed to the bar, where they were given a free sample of the Mountain Dew neon bottle.

The event was attended by a host of celebrities from the entertainment industry, including video jockey Anoushey Ashraf, actor Ahsan Khan, and musicians Zoe Viccaji, Adil Omar, Talal Qureshi and Umair Jaswal. Hip hop/electronic duo Adil and Talal, and rock band Qayaas’ frontman Umair were among those who performed on the evening.

Pop singing sensation Zoe Viccaji sang the organisers’ praises for putting together such an event and was looking forward to being a part of the audience for a change. “Luckily, I don’t have to worry about performing tonight and can sit back and enjoy the performances of other artistes,” she said. The event witnessed a slight delay due to technical difficulties and the late arrival of a few celebrities, but Umair’s riveting performance made up for the glitch. He performed a number of his most famous tracks, such as Charkha Nolakha, Sawaal and Inquilaab, to a charged crowd. The musician, who had especially flown to Karachi from Islamabad to perform at the event, interacted with several audience members during his performance.

Anoushey commended Mountain Dew for upholding the tradition of organising unique and fun-filled events. “Mountain Dew has been a pioneer of adventure sports in Pakistan, always promoting talent, which I appreciate,” she commented. She expressed hope that other brands would take notice of and organise similar events.

Shining bright in the Big Apple