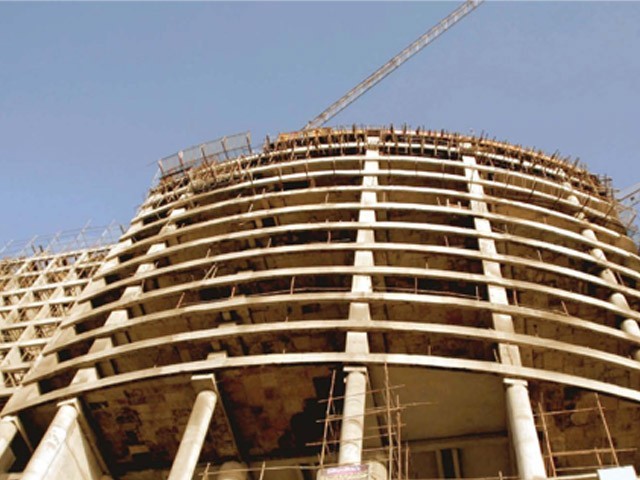 KARACHI: For the longest time after Mideast hospital was torn down, drivers emerging from the Schon circle underpass couldn’t help but be mildly startled by the gaping landscape. But then, slowly, the space started to fill up and by now, this part of Clifton’s skyline has been radically changed. The new kid on the block is the 361 feet high Sofitel Tower and Shopping Mall that is set to open in a few months.

The structure of the building is 90 per cent complete, said Abdul Rehman Naqi, managing partner in the project. The 27-storey luxury hotel-cum-shopping mall started with a domestic investment of Rs7 billion, according to earlier media reports. The project boasts four floors for parking and four for a shopping mall as well as hotel rooms, a health club, spa, swimming pool and a rooftop garden.

Big brands have already started advertising their future presence with logos and banners emblazoned across the construction site. Names such as Agha’s Supermarket, Pizza Hut, Bonanza, CityGold and Saeed Ghani vie for attention.

According to initial plans for Sofitel, the mall would house Spinneys, an international supermarket chain. However, these plans seem to have changed and now Agha’s, one of Karachi’s oldest supermarkets (that opened in 1977) is shifting to the new location and is likely to be the only supermarket in the mall, said Naqi.

“A dedicated Gold Souk will attract customers planning to shop for weddings,” said a spokesperson for the Siqqisons and Younus Brothers Group, the domestic advisers for the project.

The Sofitel Tower and Shopping Mall is part of the international Sofitel hotel chain that operates around 200 hotels in at least 100 countries. Sofitel is the second hotel in Karachi by the international Accor group that opened their Grand Mercure hotel in 2007. The Accor group is responsible for the architecture of the project. Construction of the tower began in 2008 and since then the company has been announcing different dates for the opening, skipping from 2010 to 2012 and now finally settling on 2011. When approached, a spokesperson for Siqqisons and Younus Brothers Group said, “The shopping mall along with the four-storey basement car parking, which has a capacity for 600 cars, will open by mid-2011 while finalisation of the hotel structure will continue.”