Wedding bells: Second marriage is not a crime, says Imran

Wedding bells: Second marriage is not a crime, says Imran 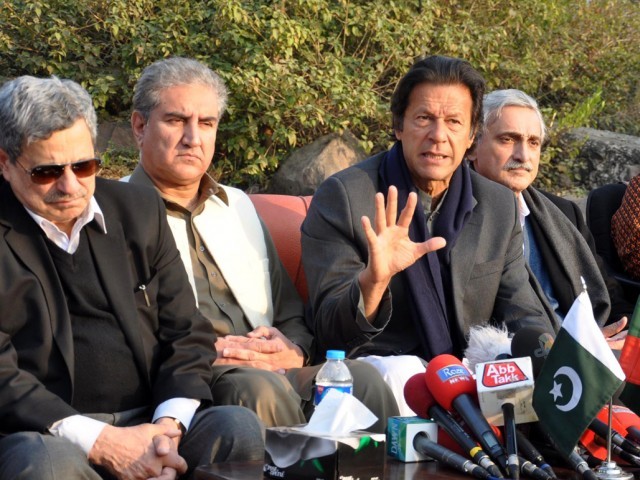 ISLAMABAD: Barely a week after rubbishing media claims that he had secretly wed a local television anchorperson Reham Khan, cricketer-turned-politician Imran Khan appeared to confirm the news of his marriage on Tuesday, saying he would share the ‘good news’ with his compatriots within a week.

At a news conference on Tuesday, Imran made no attempt to deny the news about his marriage and instead said a “second marriage is not a crime”.

The Pakistan Tehreek-e-Insaf (PTI) chairman maintained that he had delayed the decision due to his children. “Now they [children] are grown up and I will discuss with them and give the good news about my marriage in one week,” he added.

Speaking to MailOnline, Imran confirmed that he had wed 41-year-old divorced mother-of-three Reham Khan days after his family said he had denied it. His sister Aleena reacted with anger at the news, saying she did not want to meet the new Mrs Khan.

The 62-year-old, who divorced heiress Jemima Goldsmith in 2004, said, “I didn’t think of marriage for 10 years after my divorce because my children were small,” adding that “I do not ever think of hurting my children’s feelings.”

Reham, who was born in Libya to Pakistani parents, has three children from her previous marriage to a doctor.

Imran’s ex-wife Jemima Goldsmith tweeted: “And I hope Imran will be happy in this new phase of his life.”

(cont) …And I hope Imran will be happy in this new phase of his life.

She revealed in October that she was ditching the surname ‘Khan’ and reverting to her family name because her ex-husband was about to remarry.

She said at the time: “My ex-husband, Imran, recently announced that he intended to get remarried soon, which made me think it’s probably time to change my name back to Goldsmith.”

FATA varsity: Too many cooks spoil the broth