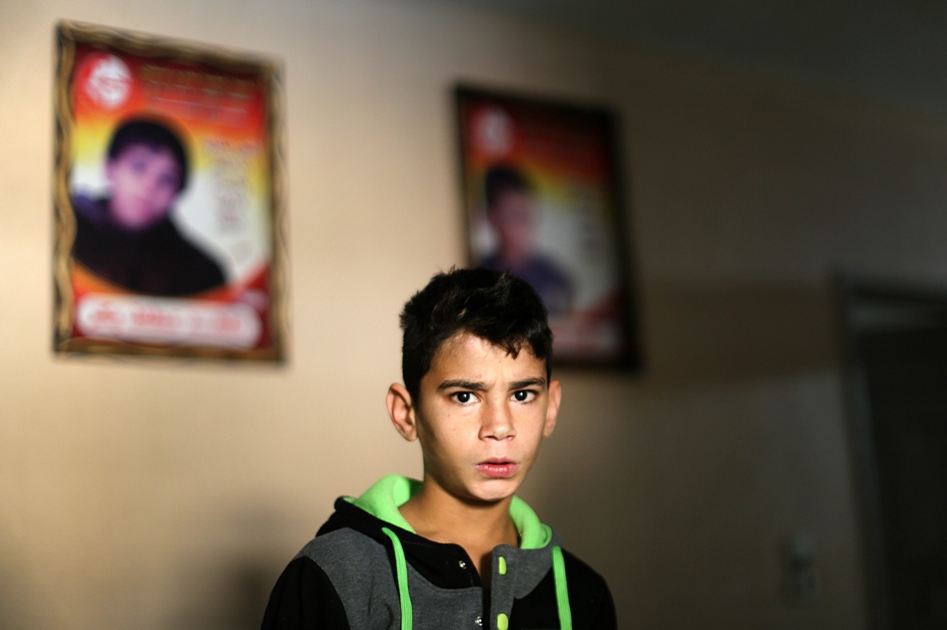 GAZA: Muntasser survived an Israeli strike on Gaza this summer which killed his young brother and three cousins. Five months and a suicide attempt later the Palestinian boy remains haunted by the memory.

Just a week into the deadly 50-day July-August war, two Israeli missiles slammed into a beach in Gaza City where Muntasser Bakr, 11, was playing football with relatives.

Four of them, all aged between nine and 11, were killed.
Muntasser, like countless other children in the embattled Gaza Strip, now faces a personal battle to overcome the trauma and psychological damage caused by the violence.

The fighting, which lasted for six weeks after the beach strike, killed nearly 2,200 Palestinians and wounded more than 10,000.

In the densely-populated coastal enclave, where more than half of the 1.8 million population is aged 14 and under, children paid a terrible price.

More than 500 children were killed - around a third of them 12 and under - and they made up more than a quarter of the wounded.

"Since the incident, Muntasser has been receiving treatment from a mental health centre," says his 55-year-old father, Ahed Bakr.

"If his appointment is delayed, or he gets his medications late - even by just 10 minutes - you can't control him."

Bakr, who lost his nine-year-old son Zakaria in the beach strike, looks on worriedly as Muntasser silently chews his nails.

"He becomes extremely violent, he breaks everything and then he starts banging his head against the walls. He even tried to throw himself off the roof."

As well as trying to take his own life, Muntasser has also attacked relatives.

"The other day, we found him trying to hang his cousins," his father says, his hands fiddling restlessly with a packet of pills.

Since the bombing, Muntasser is "in another world" and refuses to go to school, says the father.

"What if he were to try and kill one of his classmates?"

Suddenly Muntasser begins to speak, his eyes fixed on the floor.

"I don't want to go to school. Before, I used to go with Zakaria, he helped me spell my name. Now he's dead," says the boy.

"I don't want to do anything, I just want to get a Kalashnikov and kill them all to avenge Zakaria and my cousins," he shouts.

For a few seconds the boy is silent before saying how he dreams of them each night.

"I dream that I am holding them in my arms. I will never go to the beach again because that's where they died."

Health professional Samir Zaqqut says the children of Gaza have been too traumatised to live a normal life.

"The memories they have acquired during the war are harsh and impossible to erase."

"They have all undergone successive shocks and continuous traumas," he tells AFP. "After three wars in six years, how can these children live a normal life?"

Coping with the flashbacks, nightmares and severe anxiety is made even harder by the lack of mental health clinics and professionals working in the battered territory, Zaqqut says.

When the fighting ended in August, Kamela Abu Hadaf discovered that all five of her children had began wetting the bed - a common symptom of stress and anxiety.

"During the war, they were completely terrorised, but we adults were also afraid so we weren't able to reassure them."

Today, her children are receiving some help from a group of German doctors who hold counselling sessions with them.

"Since the war, he won't leave me alone any more, not even for a minute. He says: 'Stay with me so if the planes bomb us again we will die together'," says the 30-year-old. "Often I stay with him even at school."

Wissam suddenly interrupts his mother: "But why do we go to school and study? We will only be killed in the next war."

Political propaganda or not, this is the Palestinians daily struggle, this is fact. They are innocent children turning in terrorist because of the sufferance and trauma they've been through.

Its sad how your response is so baseless and irrelevant, an automated response from victims of perpetual propaganda. I wonder when was the last time, if ever, you were able to think objectively for yourself instead of spitting out what you are fed. Your response has absolutely nothing to do with the article. Re-read it and get your cognitive and comprehension abilities checked!

Excellent article! More articles like this need to circulate in the U. S.

Ali, your comments hit the nail on the head! And an excellent eye-opening article. The battle may be over for now, but the war with evil is not !!

As an ordinary citizen, what is it that we can do to help? Pray. Remember. Boycott all Israeli products. Pray some more.

@manley kiefer: Forcing Israel to protect themselves ????? Are you aware that the bakr children were purposely targeted while playing on a beach ALoNE Please watch the video. And then talk about protection from radicals. Israel is murdering children daily. Running them over. Snipers shooting kids in the face.

Ignorance is paramount. Enlighten yourself

On the contrary, Manley, they can blame the people who sent the missile that killed them, and the government that ordered those people to send it. I am not anti Jew, I assure you, and I have looked deeply into the facts. However, I am anti the apartheid regime that has been constructed in this part of the world. I suggest that you yourself look into the facts, and resist obeying your most selfish instincts which tell you to ignore inconvenient facts.

It was terrible to see the Palestinians suffer so much but they can blame their brother Muslim radicals (Hamas) forcing Israel to protect themselves. Many Palestinians were befriended and aided by Israelis during this time. I'm certain that most anti-Israel and anti Jews do not have the facts, only the false propaganda of their own countrymen. .

this is exactly correct in it's analysis. It is. A murderous regime that compares with so many others that Europe and the U.S. aso quick to condemn. It explains why bereaved mothers will praise their jihadist sons who take the only toon they feel is left to them..to risk or give their lives as an act of revenge. However we regret he loss of any innocent life their is a difference n fighting to protect your land and fighting to take the land of others. We hear so much about Israel's 'right to defend itself' but since when did oppressors have the right to defend themselves against those they oppress..certainly not in international law. This tragic renegade state that Israel has become is an insult to all those who lost their lives in the holocaust and a stain on their religion and the teachings of Judaism. Thankyoubforbyour comments.the.se things have to be said. Now one can only wait for the nasty responses from those blinded by prejudice born out of cradle to grave educational propaganda..and they will surely come. Royston

This is one of the more powerful articles i have read i am quite shaken by it. As a father my children's security it paramount, then need to always be reassured that they are safe and that I can protect them.

What child in Gaza has has that?

That quote by the 45 year old says it all "During the war, they were completely terrorised, but we adults were also afraid so we weren’t able to reassure them.”

As a father there is nothing worse then not being able to reassure your child, if you cant make him feel safe who will?

And keep in mind this is nothing new in Gaza, this isnt the first war over the past few decades this has happened, and now those children then who are adults now are the once fighting back, the ones avenging the loss of innocent lives, lives that no occupying government has the right to take.

Its no surprise that Israeli Police and IDF are rounding up all these Palestinian children, because they know what damage is being done to these children's psyche. All these children will live there life for one thing to avenge the murder of their loved ones. This is all Israels doing and then they have the audacity to call them terrorists.

What options remain for these children. no education, no employment, no infrastructure, no hospitals, humiliation, and no justice. It should come as no surprise that these children will turn to Hamas, the only group that can attempt to fight the military might of Israel/US.

God forbid but if my son had gone through what the 11 year old did, i would forgive him for joining Hamas, after all what choice does he have.

Israel and Natenyahu will go down in history as the most evil of leaders. They have managed to create a society of no moral standings, a sense of false entitlement, a sense of being chosen by God which somehow makes the murder of innocent ppl ok so as long as they are Arab. Settlers run over Palestinian children daily and settlers burning down 1000 year old trees and livelihoods of Arabs all in the name of Israel and Judaism. Give me a break, Netenyahu and his followers are no different that IS or Nazi's.

Lets call a spade a spade and Israel is an Apartheid state. No matter how you cut it they are and the proof is everywhere to be seen. In the way they deal with their Sudani and Ethiopian asylum seekers, the out right racism from its citizens towards Arabs and and within themselves between sarfids and ashkanazi.

The fact of the matter is that Israel is Occupying a land that is not theirs and they're are moving in thousands of ppl into illegal settlements. And whether all the Hasbra folk that will end up replying to this post want to believe it or not, a person fighting against its occupier can never be deemed a Terrorist. So your entire baseless claim of fighting terrorists in Gaza a Occupies territory is moot. Israel and the IDF are the true and real terrorists and im glad the world is finally able to see Israel as they always have been and are. If only social media and the internet was around 40 years ago the world would have known by now what type of monsters the leaders of Israel are, were, and will continue to be.