In memory: Parveen Shakir lives on

In memory: Parveen Shakir lives on 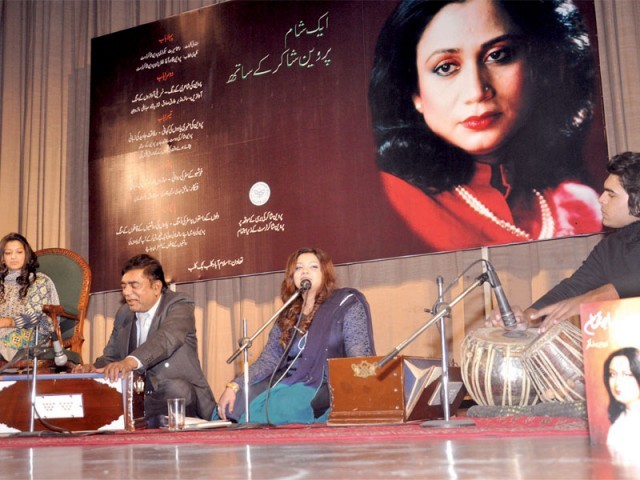 Friends and fans on Saturday paid rich tributes to Parveen Shakir at a session to mark her 20th death anniversary.

Shakir died in a car accident in Islamabad on a rainy winter morning December 26, 1994. She was 42.

Admirers remembered her in fond words, often punctuating her verses and anecdotes in their touching tributes.

Gulmeenay Sethi moderated the evening, likening its multiple sessions to chapters of a short novel, which rekindled Shakir’s memory with affection and praised her contribution to the world of Urdu literature.

“Yes, it has been two decades since the death of Parveen Shakir who died at the prime of her life, of her profession, of her charm, her beauty and of course at the prime of her literary career,” said Parveen Shakir Trust Chairperson Parveen Qadir Agha. She added that friends and well-wishers of Shakir formed the trust to promote, protect and preserve Shakir’s poetry.

“In today’s Pakistan, we are fast losing our love for literature. It is an age of journalism, social media, SMS and sensationalism. There is a fear of creative literature being lost. The speed of the growth of new poets, novelists and ghazal singers has slowed down. Hence, we in the trust feel the need for promotion of creativity as one of our main objectives. For this, I’d like to elicit the interest and involvement of our youth,” said Agha.

Rafaqat Javaid, a close friend of Shakir, reminisced the last time she had met the poet. Sharing snippets from their brief yet memorable encounter, she highlighted various facets of her personality – her innocence and resilience, a penchant for literature and a whim for ice cream in cold weather.

Khan’s rendition of “Gulabi phool” in aiman Kalyan raga and Sadiq’s “Who tou khushboo hai” were reminiscent of the metaphor of fragrance that the poet often used in her verses.

The evening rounded off with the audience lighting candles in the memory of Shakir who immortalised her words with the verse, “Mar bhi jaun tou kahan log bhula denge, Lafz mere ‘mere’ hone ki gawahi denge.”