Nawaz says terror­ists will be hunted down in cities and villag­es.
By Abdul Manan
Published: December 23, 2014
Tweet Email 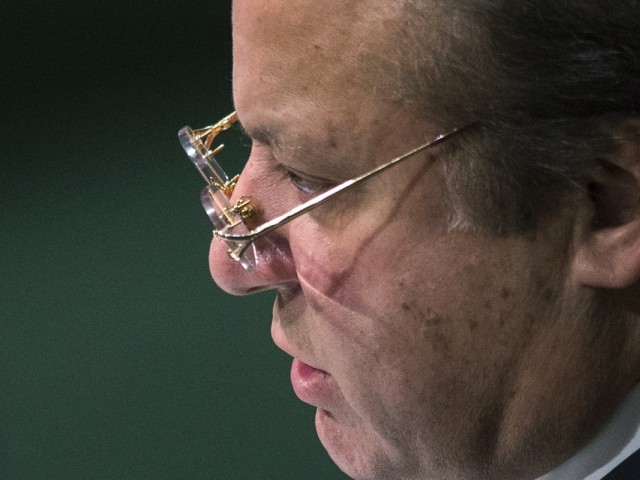 “While one Operation Zarb-e-Azb has been ongoing in the tribal areas, another will be launched against the enemy hiding in our cities and villages,” said Prime Minister Nawaz Sharif PHOTO: REUTERS

Prime Minister Nawaz Sharif announced on Monday that his government would launch an offensive against militants in rural and urban areas of the country in a bid to dismantle sleeper cells of terrorists in our midst.

“While one Operation Zarb-e-Azb has been ongoing in the tribal areas, another will be launched against the enemy hiding in our cities and villages,” he said while chairing a high-level meeting at the Prime Minister House. He was referring to the military operation launched against the Taliban and their foreign cohorts in North Waziristan Agency in mid-June.

“A decisive action will be taken against terrorists who spilled the blood of innocent people in Hazara Town of Quetta and at Peshawar church,” the premier said. He added that the government would not differentiate between terrorists and their protectors. “Terrorism and sectarianism are like a cancer for Pakistan and it is high time we got rid of this menace,” he added.

According to sources, the meeting participants reviewed and approved with amendments most of the recommendations proposed by the working group on Sunday night. The working group, comprising counter-terrorism experts, was formed last week by the national action committee following the December 16 massacre at the Army Public School and College in Peshawar.

Sources said the prime minister also convened a meeting of the country’s top politicians on Wednesday to take them into confidence before announcing the final draft of the national action plan to counter terrorism. Prior to that meeting, the interior minister will present the recommendations in a parliamentary committee on Tuesday (today).

Sources said the working group has approved constitutional amendments for the establishment of military courts for swift trials in terrorism-related cases.

“We are committed to eliminating terrorism at any cost. No mercy can be shown to those who killed our Jawans, citizens and kids,” the prime minister was quoted as telling the meeting.

The prime minister’s legal team and working group also agreed to amend the law of evidence.  According to sources, it was highlighted that due to routine procedure of direct evidence under this law, terrorists manage to escape conviction. The legal team and working group proposed changes in the law of evidence so that terrorists could be punished even on the basis of circumstantial evidence.

Sources said the working group strongly urged the government to implement the Protection of Pakistan Act 2014 in letter and spirit as under this law circumstantial evidence is admissible for conviction terrorists.

The legal team also discussed a proposal of overhauling the criminal justice system besides poring over the roles of police, judiciary, prosecution and prisons. They agreed to depoliticise the police force and noted that corruption still existed in the lower judiciary where thousands cases are pending, according to sources.

The participants proposed to restrict courts to grant only three adjournments in terrorism- related cases and to free the judges from the influence of lawyers. They also agreed to set up separate prisons for terror suspects. The legal team also discussed a code of ethics for media and empasised the need to black out terrorists’ narrative and their interviews in the media.