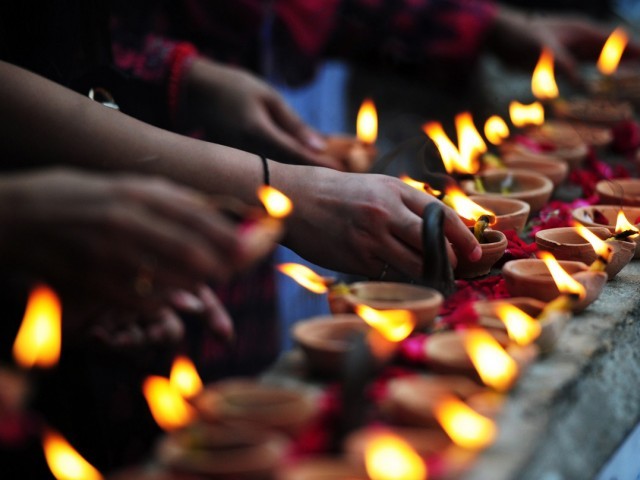 With tears in her eyes, Urooj says the armed forces were deployed on the borders to defend the people. PHOTO: AFP

PESHAWAR: The haunting images of the December 16 terror attack will be forever etched in the minds of APS students, but the one thing none of them lack is the courage to keep fighting terrorism.

The series of tributes to the “little martyred angels” of Army Public School (APS) continues as mourners throng the institute to remember the fallen.

“I lost fellow students in the attack on Black Tuesday,” APS student Khola tells The Express Tribune. “I’ve come to pay tribute to the martyrs by lighting candles and showering rose petals on their pictures.”

The student asserts she is not afraid of anyone. “We will fight valiantly and courageously against the terrorists. They cannot bring down our morale. It is higher than ever,” she says. “We are the fearless soldiers of our beloved Pakistan.”

The defiant girl assured that APS students will be on campus the day it reopens. “We will take revenge. I will urge my brothers to join the army and eliminate the militants,” she says with steely resolve.

Sana Urooj is also visiting the school to pay tribute to the martyrs. A placard in her hands reads: “We can’t forget you (little angels) and your sacrifice will not go to waste. It will yield results.”

Another placard clearly declared the students’ intent to keep fighting. “You cowards. You can’t scare us, we are raised by soldiers”

With tears in her eyes, Urooj says the armed forces were deployed on the borders to defend the people. “However, we could not protect their children. The sacrifice of APS students is a debt that we [the civilians] have to pay.”

She adds people will neither remain silent nor let the tragic events of December 16 be forgotten. “We have to stand for justice and fight against this barbarism.”

University of Peshawar student Shehroz Abdullah says the terrorists’ agenda is to spread terror, hatred and chaos. “We will not let them succeed in their evil designs,” he says. “They spread terror. We will continue to spread peace, love and brotherhood.”