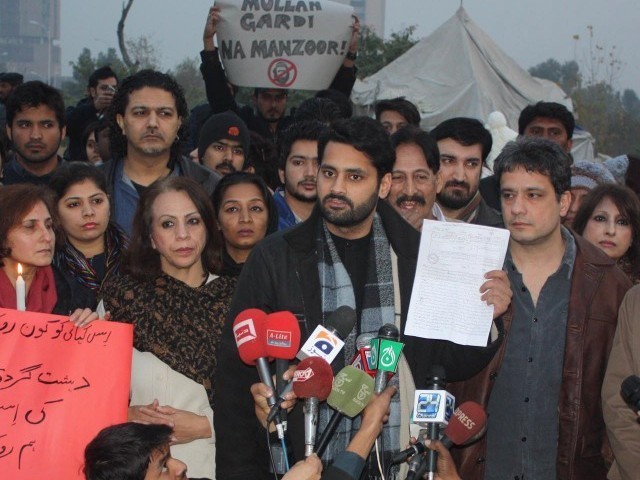 Talking to The Express Tribune, Jibran Nasir said that he had received a call, allegedly from the spokesperson of TTP faction, Ehsanullah Ehsan. Nasir went on to add that he had recorded the conversation and verified the voice of the caller with the help of media contacts who were familiar with Ehsan’s voice.

Nasir, however, made it clear that he would not back down from their planned protest today (Monday) outside the Lal Masjid. “We are not afraid. We are not backing out,” Nasir told The Express Tribune.

“We are here to save our mosques. Our mosques should preach love and peace. They must present the right spirit of Islam,” Nasir said, adding that he had a detailed debate with the TTP spokesperson on Islam before the spokesperson made his threats.

You can hear the recording made by Nasir below:

Further, Jibran said that the mobile number being used by the caller originated from Afghanistan.

The political activist also tweeted about the phone call and asserted that they will not back down.

Ehsanullah Ehsan Jammat-ul-Ahrar called today to ask us to back off from #ArrestAbdulAziz. Weve told him we are standing firm #NeverForget

We r making the phone conversation recording between Ehsanullah Ehsan & myself public shortly for record. We are standing firm #NeverForget

An FIR was lodged against Maulana Abdul Aziz at the Aabpara police station on Friday, three hours after protesters had gathered outside it demanding the cleric be arrested for supporting the Tehreek-e-Taliban Pakistan’s Peshawar school massacre.

The TTP on December 16 stormed into an army-run school killing 148 people, including 132 children.

The Lal Masjid cleric openly sympathises with the TTP and militant group Islamic State and defended the dastardly attack in Peshawar as a reaction to a military offensive launched in North Waziristan.

A senior police officer told The Express Tribune, the government can revive quashed cases against Maulana Abdul Aziz by incorporating new evidence in the ‘challan’, as he is still believed to have a soft corner for the outlawed TTP and Islamic State.

According to Section 2f (c) of the Protection of Pakistan Act 2014, a case can be registered against the cleric for his support of terrorist groups, the official said.

Applying ‘innocent until proven guilty’ adage of the criminal jurisprudence, the previous government of the Pakistan Peoples Party had quashed all cases against Maulana Abdul Aziz.

“I condemn the killing of schoolchildren and apologise,” Aziz said while talking to The Express Tribune.

The protests against the cleric which started on Thursday will continue today for a fifth day in Islamabad, Karachi, Lahore and Sialkot.

At present a large crowd is gathered outside Aabpara police station where Nasir along with Human Rights activist Dr Farzana Bari are adding new sections to the FIR registered against Maulana Abdul Aziz.

The activists are working to book Maulana Abdul Aziz under the anti terrorism act for inciting sectarian violence and for the threatening phone call received by Nasir earlier today.

Later, Nasir said he had submitted an application to add sections six, seven and eight of the Anti-Terrorism Act 1997 to the FIR against Maulana Aziz.

Copy of the Application filed by us in Islamabad to add sections to the FIR under Anti Terrorism Laws 97. pic.twitter.com/L9IA80GE6z

He added that the officials at that Aabpara station had sought time to complete their investigations before arresting Aziz.

Aabpara Police has requested 2-3 days to complete Investigation & #ArrestAbdulAziz. If they fail we gather again on Fri 5pm. Not giving up

Another Zarb-e-Azb will be fought in our cities and villages: PM