Rising from the ashes : Reconstruction begins at Army Public School

Rising from the ashes : Reconstruction begins at Army Public School 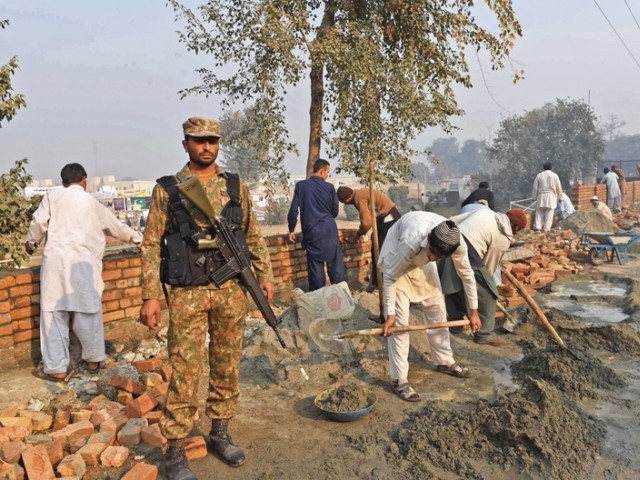 Repair and reconstruction work has been initiated at Army Public School (APS) as the country struggles to deal with the bloodcurdling massacre of nearly 150 schoolchildren and teachers earlier this week.

Around 20 workers are busy erecting a redesigned wall along the school’s boundary to make it impenetrable.

Engineer Majid Khan who has designed the reconstruction plan told The Express Tribune on Sunday that previous boundary walls had been demolished and are being replaced by new ones.

“The walls will now be 10 feet high and at least 2 feet high barbed wires will be installed on them,” said Khan.

He added repair and reconstruction is being carried out under the supervision of the Pakistan Army and they have instructions to complete the work before the start of January.

On December 17, the day after the deadly assault, Peshawar Corps Commander Hidayatur Rehman had visited the ill-fated school and announced that it will be reopened in January after restoration and rehabilitation.

According to Engineer Khan, the height and breadth of boundary wall would be increased and CCTV cameras will be installed across the school to avert any such attack in the future.

On that fateful December 16, terrorists had scaled the back wall of the school, cut the barbed wire and made their way to the auditorium where they barbarically shot dead at least 100 students of APS, before targeting more in other parts of the school. The Tehreek-e-Taliban Pakistan later claimed responsibility for the attack

A large number of people, including schoolchildren, made their way to APS on Sunday to pay their respects to the fallen students and teachers. Long queues were seen outside the school as no one was allowed to enter the premises without a thorough checking by the security forces who remain in charge of the building at the moment.

Speaking to The Express Tribune after visiting the school, Shabbir Shah who had come to Peshawar from Lahore with his family to honour the victims said the brutal murder of innocent children is the most barbaric act in the history of the country.

“I saw the images on my TV screen but I wanted to come and see the school myself. Now, I cannot control my tears,” he added. “The schoolchildren had committed no crime. The government should protect our children.”

Bisma Bibi, another visitor, wondered how the students and teachers will be able to return to the school where many of their friends died.

A brother’s letter: I will never forget the last day you went to school…