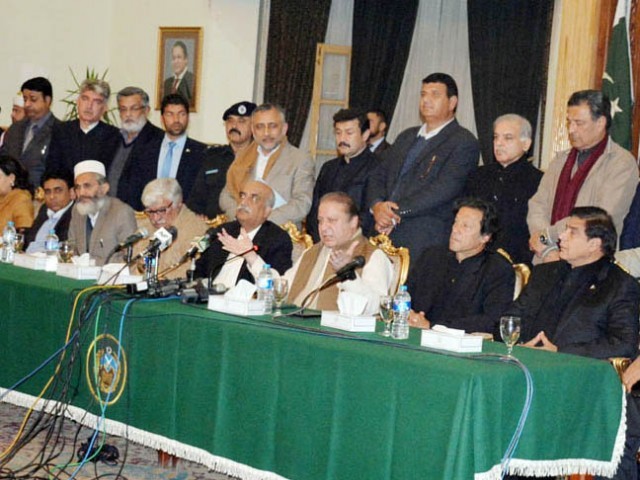 Setting aside their political differences, Pakistan’s political leadership on Wednesday vowed to avenge the dastardly massacre of 148 people at the Peshawar school and eliminate every single terrorist ‘without discrimination’.

“We have decided to draft a national plan of action against terrorists and act upon it immediately,” Prime Minister Nawaz Sharif said while reading out decisions taken at a meeting of heads of all parliamentary parties at the Governor’s House in Peshawar.

“We have unanimously decided that a committee under Interior Minister Chaudhry Nisar Ali Khan will prepare a national plan of action against terrorism and present its report to the national leadership within seven days,” he announced. “This plan will be presented before the people of Pakistan after the approval of the political leadership.”

The committee will comprise members from all parliamentary parties and representatives from the armed forces and intelligence agencies.

“We announce that there will be no differentiation between ‘good’ and ‘bad’ Taliban. We also resolve to continue the war against terrorism till the last terrorist is eliminated from the country,” the premier added.

Prime Minister Nawaz termed the murder of students and staffers at the Army Public School and College in Peshawar “a cowardly move by terrorists on the run as a result of Operation Zarb-e-Azb.”

“We express deep grief over the Peshawar tragedy. This violence has no match in the history of Pakistan,” he said.

Backing the decision to launch full-scale offensives against militants in North Waziristan and Khyber Agency, the prime minister said, “We have all seen the results of dialogue with the Taliban. We could not achieve anything through dialogue and then the Karachi airport was attacked.”

He reiterated his government’s resolve to carry out the ongoing operations against terrorists with ‘a clear mind and determination’.

At the same time, Nawaz stressed the need for taking stern action against militants across the country and not just in the tribal areas.

“Operation Zarb-e-Azb is continuing successfully but we need to draft a plan of action to eliminate the menace of terrorism from the whole country.”

He added that although the operation had yielded positive results, some militants had fled to Afghanistan. “We want peace not only in Pakistan but in Afghanistan as well. We want peace in the whole region,” the PM said.

Nawaz admitted that the prosecution of arrested militants was a big challenge.  “There should not be any space for hardcore terrorists to escape punishment.”

Regarding the decision to lift the moratorium on the death penalty in terrorism cases, the prime minister said, “If terrorists are not punished, then who will be punished?”

At the news briefing held after the meeting of heads of all parliamentary parties, Premier Nawaz and Pakistan Tehreek-e-Insaf (PTI) Chairman Imran Khan engaged in a rare handshake as a gesture of unity following the Peshawar tragedy.

The prime minister, who was sitting next to the PTI chief, thanked the latter for attending the meeting. “I’m thankful to Imran Khan for attending this meeting and I’ve invited him over for tea,” he said, adding that “all issues can be resolved through dialogue in a democracy.”

Nawaz also said that he had written to the chief justice of regarding the formation of a judicial commission.

In response to this, however, Imran said, “Our differences are not about our egos, they are about poll rigging.”

“The nation has to unite because the military cannot win this war alone,” he said, adding that he would fully back the government in the fight against terrorism.

The PTI chief added that he would go directly to his container from his conference to offer funeral prayers in absentia for the victims. At that point, Nawaz remarked in a lighter vein that he had to “visit the injured children at the hospital otherwise I would have gone to the container with Imran.”