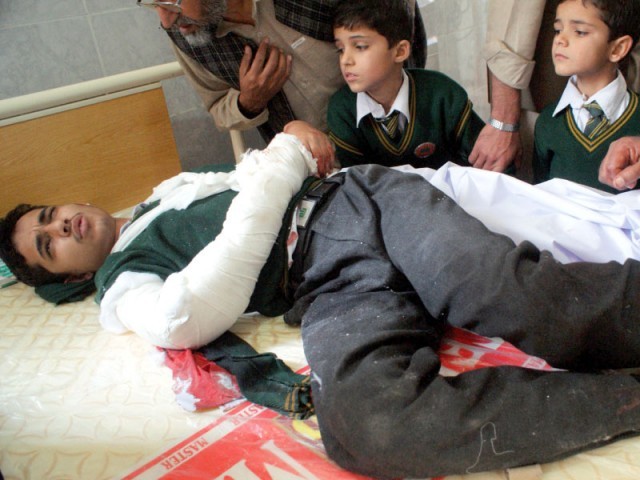 On Tuesday, Peshawar witnessed the bloodiest and the most savage terrorist attack the country has seen in years. At least 141 people, including nine staff members, were killed and 121 wounded when seven Taliban gunmen stormed the Army Public School and Degree College on Warsak Road in the Cantonment area around 11am.

More than eight hours after the gunmen slipped into the heavily guarded compound through a back entrance, chief military spokesman Maj Gen Asim Saleem Bajwa declared the operation to flush them out over, saying that all the attackers had been killed. At least a dozen explosions were heard during the course of the operation.

The banned Tehreek-e-Taliban Pakistan (TTP) immediately claimed responsibility for the sickening attack. “We selected the army’s school for the attack because the government is targeting our families and females,” said TTP spokesman Muhammad Umar Khorasani. “We want them to feel the pain.”

Briefing the media after the school compound was cleared by army commandos, Maj Gen Bajwa said, “Today is a day of national tragedy and the blackest day of our history.” He added that seven security personnel, including two officers, were wounded in the operation.

When the militants opened fire, panicked children tried to flee through the auditorium’s two exits. Maj Gen Bajwa said the army troops who entered the building to take on the gunmen saw children lying on the blood-spattered ground.

As a Quick Response Force team rushed to the scene, the militants holed themselves up inside the school’s administration block. “One of the terrorists was killed at the auditorium’s exit gate, while the remaining six were killed in the Special Service Group (SSG) operation inside the administration block,” said Maj Gen Bajwa, adding three of them were targeted through windows.

The militants were carrying explosives, but did not get a chance to assemble improvised explosive devices, he said, adding that army troops have cleared the explosives and handed the building to the school administration.

According to the military spokesperson, 1,099 children and staffers are registered at the school. Around 960 students and staffers were rescued, while the SSG commandos also found 23 children hiding behind the school building after the operation, he said.

Maj Gen Bajwa claimed that they know exactly which militant group orchestrated the attack and where it is based. He, however, said details could not be shared with the media due to operational reasons. Chief of Army Staff General Raheel Sharif, who was in Quetta at the time, also cut short his visit and flew to Peshawar to personally monitor the situation, he added. SSP Operations Najeebur Rehman Bugvi said the militants donning military fatigues had come in a Suzuki van which was set aflame when they reached the school. “They were armed with automatic rifles, hand grenades as well as suicide vests,” he told The Express Tribune before Maj Gen Bajwa’s briefing.

Initially, the SSG commandos and police elite force personnel had launched a combined operation, but the different coloured uniforms only caused confusion so the operation was called off and the second one was launched by SSG commandos around 3:30pm and lasted till 5:30pm.

The dead and injured children were taken to the Combined Military Hospital and the Lady Reading Hospital. The corridors of the CMH were lined with dead students, their green-and-yellow school uniform ties peeping out of the white body bags. The dead and injured students were 10 to 20 years old, according to medics.

The gunmen, who several students said communicated with each other in a foreign language, possibly Arabic, managed to slip past the school’s tight security because at least some of them were wearing Pakistani military uniforms, some witnesses said.

Warsak Road saw a flurry of activity throughout the day as parents, brothers and sisters searched frantically for their loved ones. “He is nowhere. My son has probably been made hostage,” said Saleem as he stood outside the school building surrounded by a dozens of army and police personnel. “May God destroy these terrorists who are settling their scores by killing our innocent children,” he said, crying and praying for the safety of his child.

Osama Bashir, a student of grade eight, must know of his mother’s state even before he saw her. “I told mama on the phone I am safe, but I have been hit by a bullet in the chest,” he said lying in a bed at Lady Reading Hospital. “They shot my friends, some of them in the face.”

The entire nation was shocked by the scale of the massacre and the loss of so many young lives. The attack recalled the 2004 siege of a school in Russia’s Beslan school siege by Chechen militants which ended in the death of more than 330 people, half of them children.