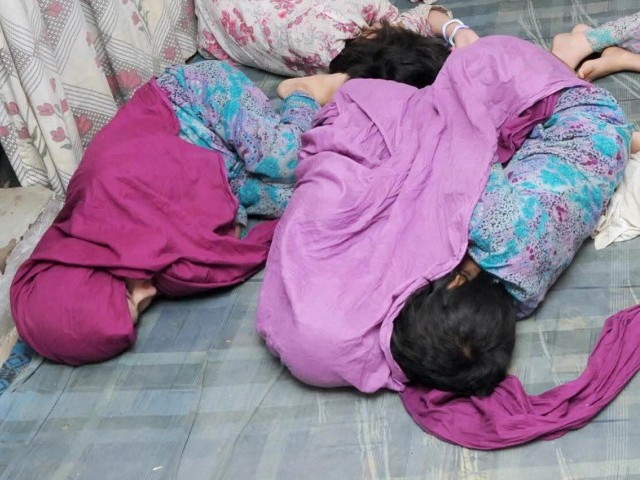 A file photo of the girls recovered from a house in Karachi. PHOTO: MOHAMMAD NOMAN/EXPRESS

A parliamentary panel on Monday rejected the Ministry of Human Rights’ report regarding the recovery of underaged girls from a house in Karachi and directed action against the madrassa from where the girls were removed.

The issue was taken up by the National Assembly Standing Committee on Law, Justice and Human Rights.

Earlier in November, police raided a house in the Liaquatabad neighbourhood of Karachi and recovered 26 minor girls, apparently kept there in illegal detention as students of an unregistered seminary.

During the briefing, a representative of the Ministry of Human Rights informed the committee that the girls have been handed over to their parents but the committee rejected the report and sought details of all the girls.

Chairman Bashir Virk questioned representatives of the ministry regarding action against the madrassa. The committee expressed its apprehensions that these girls could have been smuggled abroad.

The ministry told the committee that all the girls have been handed over to their parents while three persons, who brought the girls to Karachi, have been arrested and are in jail.

Ayaz Somroo from the Pakistan Peoples Party pointed out that those arrested “have been released from the jail on bail”.

“Tell us whether the madrassa was registered, what course is taught there and where is Hameeda Bibi [patron of madressah] who had brought them there earlier,” the committee asked the ministry.

The committee also directed the ministry not to rely on the police report in this case and instead visit Karachi for a detailed and comprehensive investigation.

“The Ministry of Human Rights have a huge budget but its performance is zero,” commented the chairman of the committee.

Urdu as an official language

Meanwhile, the committee deferred a bill from MNA Asiya Nasir of Jamiat Ulema-e-Islam seeking an amendment in Article 251 of the Constitution for calling upon the government to make arrangements for using Urdu for official purposes from January 1, 2015.

Presently, Article 251 states: “The national language of Pakistan is Urdu, and arrangements shall be made for it being used for official and other purposes within 15 years from the commencing day.”

Nasir proposed that it should be made compulsory for all national institutions to use Urdu language during official visits.

The bill was deferred after a representative of the Ministry of Law and Justice informed the committee that it was waiting for advice of the Information Ministry. The officials also admitted that Urdu had not gained the status of national language in “true sense” so far.