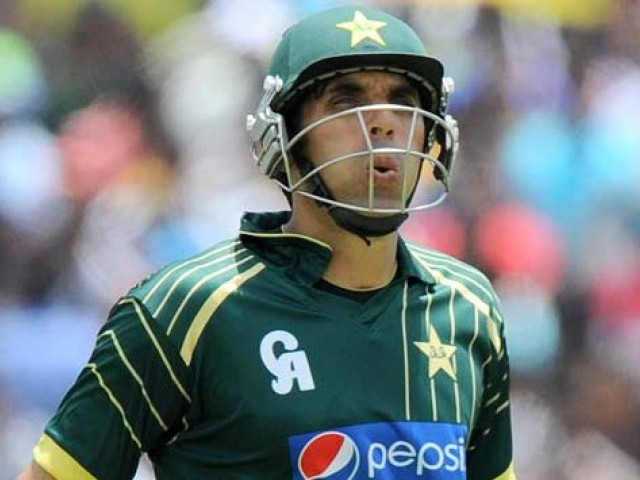 Misbah fell awkwardly while chasing a shot in the third over of New Zealand’s innings during the second day-night international in Sharjah.

New Zealand won the match by four wickets to level the five-match series at 1-1. Pakistan won the first match by three wickets in Dubai on Monday.

“Misbah has a hamstring issue and he will have a scan and then we will decide. He is not very good,” said Waqar.

Asked who would lead the team if Misbah is ruled out, Waqar said it would be up to Pakistan Cricket Board chairman Shaharyar Khan to decide.

“Look, captaincy’s issue is chairman’s domain and we will probably ring him if Misbah is not available to decide what we are going to do,” said Waqar.

Fast bowler Bilawal Bhatti was also ruled out of the third one-day after he injured his right hand during practice and needed stitches.

Another fast bowler, Umar Gul, is also on the injury list after missing the second game due to a sore ankle.

“It’s a long tour and there are bound to be injuries, we have lost Junaid (Khan) and we need to solve these injury issues before the World Cup next year,” said Waqar.

Pakistan has been in United Arab Emirates since October. They played a Twenty20, three one-day internationals and two Tests against Australia before their two Tests, two Twenty20 and five one-day series against New Zealand.

Junaid injured his knee during the one-day series against Australia in October and is still recovering.

Waqar said he was still searching for a right bowling combination, badly affected by the suspension of ace spinner Saeed Ajmal and all-rounder Mohammad Hafeez due to illegal bowling action.

“We are trying to build the right combination for the World Cup and these issues have not allowed us to do so,” said Waqar, who blamed a below par total for the defeat on Friday.

“I guess we couldn’t get the target we were looking for, things would have been different had we got some more runs,” said Waqar of Pakistan’s 252 all out.

New Zealand chased down the target in 46 overs with skipper Kane Williamson hitting an unbeaten 70.

“We didn’t bowl right line and length and that failed us.”

The fourth and fifth matches will be played in Abu Dhabi on Wednesday and Friday.

Skipper Misbahul Haq was fined 15% of his match fee for showing dissent at an umpire’s decision and Kiwi bowler Adam Milne was reprimanded for using obscene language during a one-day international in Sharjah.

New Zealand won the match by four wickets on Friday to level the five-match series at 1-1 after Pakistan took the first game in Dubai.

Misbah also hurt his hamstring while fielding and is now doubtful for the third match, also in Sharjah on Sunday.

“Misbah was fined 15% of his match fee for… showing dissent at an umpire’s decision during an international match,” the International Cricket Council (ICC) said in a statement.

Misbah expressed his displeasure in the 37th over after TV umpire Joel Wilson upheld on-field umpire Richard Illingworth’s decision to give him caught behind off paceman Matt Henry.

Misbah made 47 in Pakistan’s total of 252 all out, which New Zealand overhauled in 46 overs.

After Milne had dismissed Shahid Afridi in the 41st over, the right-arm fast bowler was clearly observed using an inappropriate word, the sport’s world governing body added.

“After the match, both players admitted the offences and accepted the sanctions proposed by Sri Lankan match referee Roshan Mahanama,” the ICC said.

Under the ICC’s code of conduct all Level 1 breaches carry a minimum penalty of an official reprimand and a maximum penalty of 50% of a player’s match fee.

The final two games in the series will be played in Abu Dhabi on Wednesday and Friday.

Heroic Kohli happy to hand back India captaincy to Dhoni