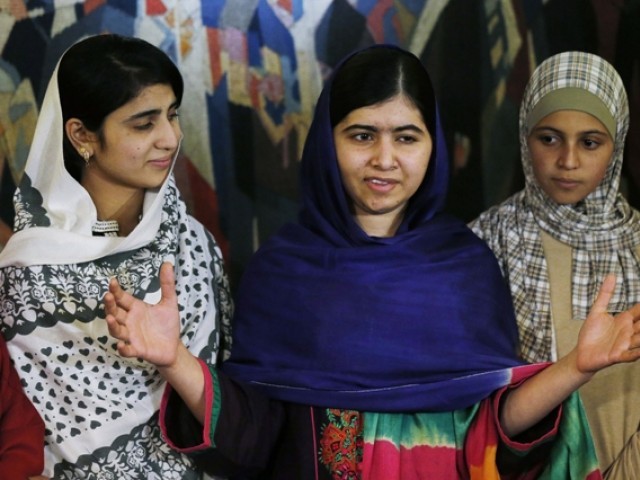 ISLAMABAD: Schoolgirl activist Malala Yousafzai’s courageous fightback from being shot by the Taliban has transformed her into a symbol for human rights and a campaigner in global demand.

Few teenagers can lay claim to a Nobel Prize, or say they spent their 17th birthday lobbying Nigeria’s president to do more to free hundreds of girls kidnapped by Islamist militants.

But Malala is no ordinary teen.

She had already been in the public eye for years when a Taliban gunman boarded her school bus on October 9, 2012, asked “Who is Malala?”, and shot her in the head.

Her father Ziauddin, a school principal and himself a seasoned campaigner for education, helped propel the precociously talented girl from the Swat valley in northwest Pakistan into the limelight.

At his encouragement, Malala started writing a blog for the BBC’s Urdu service under a pseudonym in 2009, aged just 11, about life under the Taliban in Swat, where they were banning girls’ education.

In 2007 militants had taken over the area, which Malala affectionately called “My Swat”, and imposed a brutal, bloody rule.

But it was only after the shooting in 2012, and Malala’s subsequent near-miraculous recovery in a British hospital, that she became a truly global figure.

Former British prime minister Gordon Brown, a UN special education envoy, visited her in hospital shortly afterwards and took up her cause with a petition which he presented to the Pakistani government.

She has since become something of an international star — a formidable, and instantly recognisable force for human rights.

She received a standing ovation in July 2013 for an address to the United Nations General Assembly in which she vowed never to be silenced.

The 17-year-old has also published an autobiography and been invited to tea with Queen Elizabeth II, achieving a level of fame more akin to a movie star than an education campaigner.

In an interview in 2013 with CNN’s Christiane Amanpour at a sold-out public event in New York, Malala said she wanted to become prime minister of Pakistan to “save” her country.

Her autobiography “I am Malala” reveals a more girlish side to the teenager — she is a fan of Canadian pop sensation Justin Bieber and the “Twilight” series of vampire romance novels.

But her activism has continued. On her 17th birthday earlier this year she was in Abuja, pushing President Goodluck Jonathan to meet with the parents of hundreds of girls who had been kidnapped by the Islamist group Boko Haram.

Although she missed out on the Nobel Peace Prize in 2013, she was nominated a second time this year and won along with Kailash Satyarthi, an Indian children’s rights activist.

Her feat was lauded by Pakistan’s leaders, its liberal press and many girls and women in her native Swat who see her as an inspirational figure.

But she remains controversial among some conservatives at home, who view her as a Western agent on a mission to shame her country.

An association of private schools held an “I am not Malala” day last month exemplifying the trend.

The controversy has not deterred her, however.

In October she announced she would donate $50,000 to help rebuild United Nations schools in Gaza, and last month she addressed a thousand schoolchildren in her home province via videolink, urging them to fight on for education.