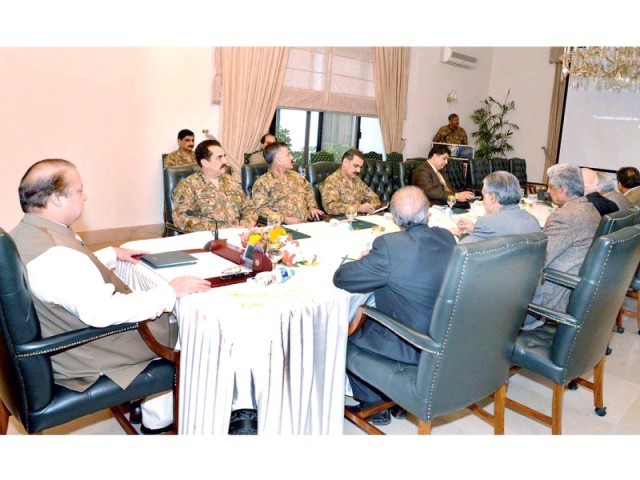 Nawaz Sharif being briefed about operation Zarb-e-Azb and return of IDPs. PHOTO: APP

Six months after the launch of Operation Zarb-e-Azb in North Waziristan Agency, a high-level civil-military huddle on Tuesday discussed several options for the repatriation of tens of thousands of displaced tribesmen and reconstruction of their areas, The Express Tribune has learnt.

Prime Minister Nawaz Sharif, who chaired the meeting, said that operation Zarb-e-Azb had inflicted a fatal blow on terrorists and Pakistan’s armed forces had given exemplary sacrifices in this operation. “Peace has been restored as a result of this operation and it’ll contribute towards ensuring peace in the entire region,” he added.

The high-level meeting was convened to discuss formulation of a comprehensive strategy for the rehabilitation of IDPs and reconstruction of the areas where Zarb-e-Azb has been ongoing since mid-June.

According to an official handout, the prime minister said the tribesmen displaced from North Waziristan and officially designated as internally displaced tribesmen (IDPs) had given great sacrifices for the stability of Pakistan, and the state would look after their needs by reconstructing better areas for these displaced persons when they return.

Sources, however, said that the meeting discussed several options for the rehabilitation of the Waziristan IDPs. The Pakistan Army had completed the repatriation of IDPs from Swat following a successful military operation in the district in 2009. The meeting participants appreciated the Swat model and said it should be replicated in North Waziristan.

Sources said that the meeting discussed several issues related to the rehabilitation and reconstruction of North Waziristan including a phased rehabilitation of IDPs, local and foreign funding, mobilisation of resources, construction of hospitals, housing colonies and roads, etc. The meeting said a comprehensive strategy, to be chalked out by the army, should clearly state the roles of the FATA Secretariat and K-P and federal governments.

According to sources, Finance Minister Ishaq Dar told the meeting that his ministry has so far released more than Rs26 billion for Operation Zarb-e-Azb and rehabilitation of IDPs. Sources said the government would credit funds into the defence ministry accounts and the prime minister would not issue development funds to MNAs and senators from the Federally Administered Tribal Areas (Fata).

The military had launched Operation Zarb-e-Azb on June 15 and according to military’s statistics over 1,200 militants – both local and foreign – have been killed and several hideouts and weapons factories have been destroyed in the offensive. Four months later another security operation was launched in Khyber Agency to hunt down the militants who had fled North Waziristan.

Sources said that Operation Zarb-e-Azb would continue till the last terrorist was eliminated and that its scope would be expanded gradually.

Day of mourning: Preconditions for talks not acceptable, says PTI