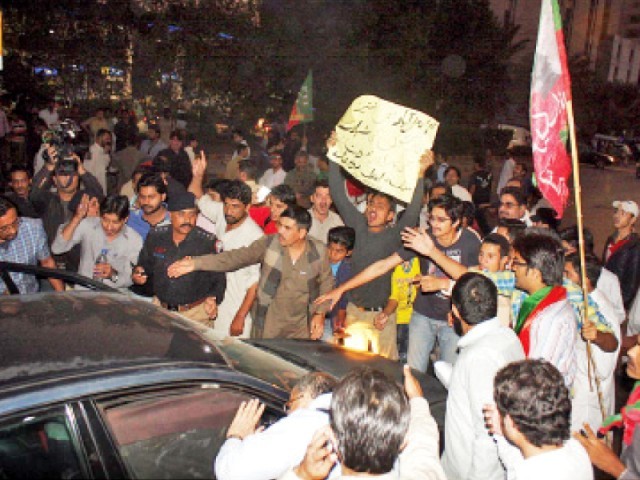 PTI supporters obstruct the path of a car on Sharae Faisal in Karachi, after coming out on the streets to protest the incidents of violence in Faisalabad. PHOTO: ONLINE

KARACHI / SUKKUR / HYDERABAD: The fallout of the chaos in Faisalabad reached the port city on Monday evening when angry activists of the Pakistan Tehreek-e-Insaf (PTI) took to the streets where they burned tyres and shouted anti-government slogans to mark their protest.

At one end, Sharae Faisal was blocked by workers resulting in massive traffic jams, while at the other end, PTI leaders held a press conference to reiterate that Karachi, the financial hub of the country, shall remain closed on Friday, December 12.

“Karachi ko bund rakhain gay (We will shut down Karachi),” said Syed Hafeezuddin, repeating part of the party’s Plan C to hold shutter down strikes across the country.

PTI’s Sindh chapter president, Nadir Akmal Leghari, who addressed the press conference at Palwal House in DHA, lashed out at the Pakistan Muslim League – Nawaz (PML-N). “To hide its rigging, the government can stoop to any level. This won’t do any good to democracy.”

Condemning the Faisalabad incident, the PTI leadership has declared Tuesday a ‘day of mourning’ across Sindh, adding that it will hold a demonstration at Regal Chowk on Tuesday at 5pm.

For the December 12 shutdown, the party chairperson Imran Khan will be coming to Karachi on Friday afternoon. The city will likely be shut down for the whole day while the sit-ins which are now expected to be held at 30 locations will commence after Friday prayers.

Dozens of party workers came out to protest in Karachi. At Sharae Faisal, PTI workers gathered at the Insaaf House and then blocked the roads, which resulted in traffic jams.

At the time of filing of this report, the protesters were marching towards the PML-N headquarters at Karsaz.

In Hyderabad, supporters of the two parties engaged in a brief clash on Monday. The incident unfolded outside the Dial Das Club, located around 200 meters away from the press club.

In Sukkur too, dozens of Pakistan Tehreek-e-Insaf (PTI) workers and supporters, led by the party’s regional coordinator, Dr Rab Nawaz Kalwarh, gathered at Minara Road to protest the incidents of violence in Faisalabad.