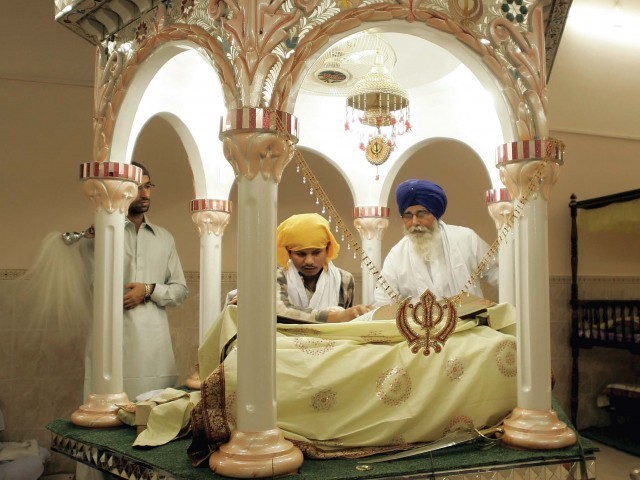 KARACHI: The keeper of the Bhagnari temple, a bald Hindu man, slowly enters the brightly coloured prayer room. He walks straight up to a table where the Guru Granth Sahib – the Sikh holy book – is placed along with a pot, whose lid he removes to scoop a handful of rice.

On the other side of a room a turbaned Sikh, Manmohan Singh, frowns and shakes his head. “Just because our Guru Granth Sahib is in their temple, they think they can get away with anything,” he says. “They are not respecting our book, this is not a place to eat and drink.”

This temple, situated near Lea Market, was razed in a fire incident in May, which also damaged three Guru Granth Sahib. Manmohan believes the incident was not caused by short-circuit as claimed. “All our books were damaged in the fire,” claims Manmohan. “But the Krishna idols in the same room went unscathed.”

Such sentiments between the Sikhs and the Hindus are becoming common as more and more incidents of the desecration of Sikh scriptures surface. Over the last 18 months, Sikhs claim that their holy scripture has been desecrated in seven separate incidents across the province, where the Guru Granth Sahib was either burned or torn. The latest incident took place on November 14 when a Hindu, by the name of Deepak Kumar, was arrested in Khairpur for tearing off 100 pages of the book in a temple.

Tensions, therefore, are at an all-time high between the two minorities. “If they can’t take care of our books, then they should just return them,” says Pakistan Sikh Council’s head Ramesh Singh.

For many years, the Hindus have been keeping the Guru Granth Sahib in their temples as tradition but now, the Sikhs feel, their holy book is being disrespected.

The Sikh code of conduct defines that no idols or pictures should be placed or hung in the same room as the holy book. Eating is not allowed, nor is clapping or dancing. The room, which is to be kept sparkling clean, should only be entered with covered heads.

“The Hindus are not following our code of conduct,” says Manmohan, as he waves a finger at the deities, pictures and the utensils in the room, pointing out one violation after the other.

Another Sikh, Jaswant Singh, who visited Khairpur after the book-tearing incident that shook many of its residence, says that the Sikhs want the ‘separation’ of the gurdwara and the temple. “The temple and the gurdwara should not be together,” he said. “We should be given separate plots for our own place of worship.”

Manmohan and his peers have set December 4 (today) as the deadline for the heads of the Bhagnari temple to remove the idols and the pictures from the room where the Guru Granth Sahib is kept. “If they can’t follow our rules, then we shall take it back,” he said. “We will not tolerate this anymore.”

The Hindus, however, claim that they keep the Guru Granth Sahib with utmost respect. The Pakistan Hindu Council (PHC), the biggest Hindu organisation in the country, refutes claims of sabotage in the Bhagnari temple fire. “If the Guru Granth Sahib was damaged, then so were our deities,” asks PHC chief patron Ramesh Kumar. “We respect the book just as much as the Sikhs do.”

Other Sikhs also do not share the same resentment that Manmohan and Jaswant display. Amar Singh lives in Ranchore Line’s Narayanpura, an area where the Sikhs and the Hindus live together, and he claims that there is no hostility between the two communities. Every week Amar goes to the Swami Narayan Mandir and bows in front of the Guru Granth Sahib. He admits that the pictures on the wall sadden him but he usually pays it little heed.

According to the head of the Pakistan Sikh Council, one solution can be that the government builds more gurdwaras for the Sikhs in Sindh. “We have written letters to the provincial government several times to allot us land. This way all the Guru Granth Sahibs can be moved there.”

Commissioner calls for calm as contestants opt for mud-slinging