A total of 21 young women have comple­ted their two-year traini­ng at AKU.
By Ishrat Ansari
Published: November 29, 2014
Tweet Email 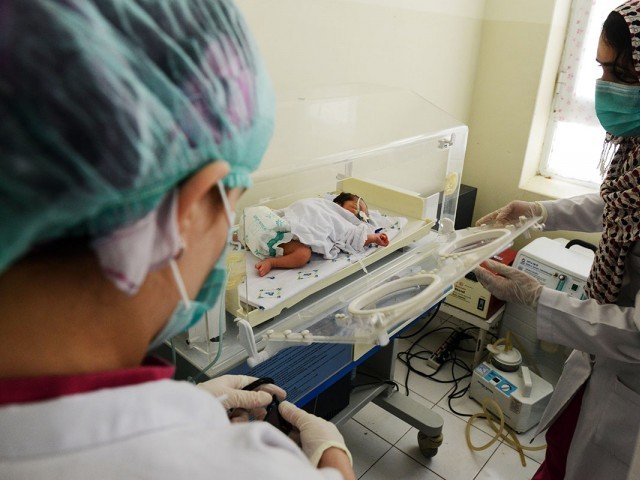 "We give importance to a gynaecologist when she gives us advice but don't listen to midwives," Institute of Nursing director Hakim Shah. PHOTO: AFP

Pakistan’s first batch of professional midwives will step into the real world today. These 21 women are part of Aga Khan University’s (AKU) midwifery programme that will hold its convocation today.

The graduate programme introduced by AKU is the first initiative of its kind not only in the country but also in South Asia, claimed the midwifery association president and AKU professor, Dr Rafat Jan, during an interview with The Express Tribune. Dr Jan’s foremost concern is the negative connotations associated with the word ‘dais’. “Midwives should not be called dais as they are professionally trained and skilled,” she said. “Despite being trained in both public and private sectors, the midwives are sidelined at the time of delivery as they are considered unskilled and incompetent.” In her opinion, trained midwives are more than capable of handling normal deliveries.

The young women who have completed AKU’s two-year programme are excited to be able to stand on their feet. “I am the only woman in the Raisani tribe who stepped out of the house to support my family,” claimed a student, Rukhsana Dost Muhammad, 34. “What encouraged me to excel in the field of midwifery was my cousin’s death during delivery and that too right in front of my eyes,” she recalled. “Before I started teaching, I always felt disrespected working as a health worker and a nurse.”

The students have big plans for the future. Thirty-year-old Roma Shehzadi from Gujrat plans to go back and work in Lahore’s Jinnah hospital, where she is a permanent employee. She won a scholarship to join AKU’s programme and felt it did wonders to her career. “We were given evidence-based knowledge and hands-on practice,” she said. “It will definitely help me work confidently and efficiently when I return to work after the convocation.”

Dow University of Health Sciences’ associate professor, Hakim Shah, who is also the director of the Institute of Nursing, stressed the need to train nurses more extensively. Midwifery does not only involve handling delivery but also postnatal and neonatal care, he added.

“We give importance to a gynaecologist when she gives us advice but we do not listen to midwives,” he claimed. “We undermine the capabilities of midwives. They will not gain respect and dignity until there is social acceptance.”

Around 44 per cent of the lady health workers in Sindh were trained as skilled birth attendants and they helped women aged between 15 and 49 years in deliveries between 2006 and 2007, according to data provided by the Population Council. The number of birth attendants increased to 61 per cent by the year 2012-2013.

Why does Sindh still have the highest maternal mortality rate among all provinces? Shah felt this is because midwives have limited job prospects. “There are a number of positions in government hospitals but employing them is a gigantic task because of political influence.”

Shah suggested the government carry out surveys to find out where midwives are needed most and then employ these graduates where these skills are required most. Sindh is, however, taking some good steps. “It is the only province where midwives are appointed at a high grade (Basic Pay Scale-16),” he said.