US drone strike: Uzbeks among 9 killed in North Waziristan

US drone strike: Uzbeks among 9 killed in North Waziristan 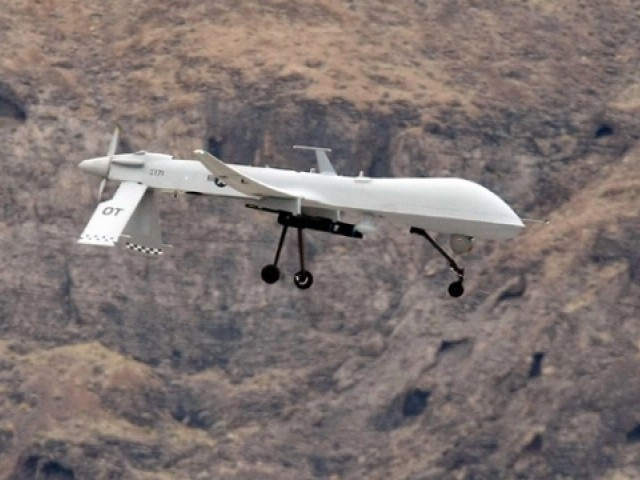 A file photo of a drone. PHOTO: AFP

A US drone strike killed at least nine suspected militants in North Waziristan on Wednesday, security officials said, as pamphlets allegedly linked to the Islamic State in Iraq and Syria (ISIS) movement were distributed in Wana, South Waziristan.

The unmanned aircraft hit a compound in Kund Ghar village, 60 kilometres from Miramshah, the main town of the North Waziristan Agency.

“The drone fired two missiles at the compound and a car, killing nine militants,” a security official told The Express Tribune.

Earlier reports placed the toll at eight dead and two injured. However, they quoted security officials as saying that more dead bodies could be buried under the rubble.

According to independent sources, fighters loyal to warlord Hafiz Gulbahadur and militants affiliated with the Haqqani network were present inside the compound when it was hit. They said three Uzbek militants were among those killed by the drone.

An intelligence official in the area who verified the attack, confirmed militants loyal to Gulbahadur and the Haqqani network as well as foreign Uzbek fighters operate in the area.

Pakistan was quick to condemn the latest drone strike. “The government of Pakistan condemns the drone strike that took place in the early hours of Wednesday,” the foreign ministry said in a statement.

“Pakistan regards such strikes as a violation of its sovereignty and territorial integrity and demands their immediate cessation. The government of Pakistan is itself taking decisive action against terrorist elements in North Waziristan Agency, thus rendering such strikes completely unnecessary,” it added.

The strike came a day after Pakistani jet fighters killed 20 suspected members of the Haqqani network, accused of some of the bloodiest attacks in Afghanistan including the blast that left 57 people dead last weekend.

In a similar attack on October 30, a US drone strike killed at least seven militants including an important commander of the Haqqani network in the village of Nargas in South Waziristan. Security officials at the time said the commander Abdullah Haqqani was responsible for sending suicide bombers to Afghanistan.

Pamphlets, allegedly issued by ISIS, were distributed around Wana, the main town of South Waziristan Agency, on Wednesday.

The pamphlets, which were dropped around Wana Bazaar the night before, accuse a local elder of aiding the US carry out drone strikes against the Taliban and say ISIS has orders from its chief to “take action against those who are against Islam and Mujaheedin in every country, city and village.”

The authenticity of the document, copies of which were sent to the media as well, could not be determined.

On the other hand, the pamphlet praised locals for supporting Mullah Nazir’s Taliban faction. But the group distanced itself from ISIS.

“The pamphlet is baseless and has nothing to do with reality,” Mullah Salauddin Ayubi, the faction’s new leader, said in a statement issued through the group’s spokesman. He said the pamphlet was a bid to disrupt peace in the area.

Moreover, the Taliban faction said it had no reservations against the tribal elder accused of aiding the US in the pamphlet.

The group’s spokesman, Zahid Wazir, suggested a third party was using the pamphlet to take advantage of a land dispute between two local tribes.