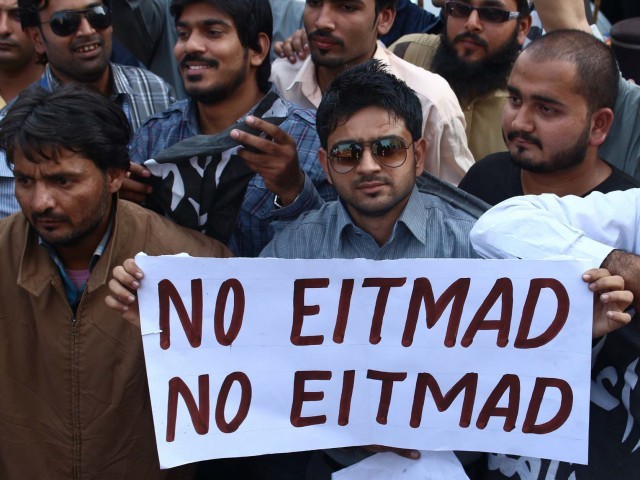 KARACHI: Scores of travel agents took to roads in protest on Wednesday against the introduction of biometric system for Pakistanis applying for visas to Saudi Arabia, including for Haj and Umrah.

Under the umbrella of Travel Agents Association of Pakistan (TAAP), dozens of travel agents gathered outside the press club on Wednesday and shouted slogans against Etimad (Private) Limited—a travel company in Pakistan, which is processing the biometric enrolment for Pakistani applicants, and creating problems for over 700,000 Pakistanis who travel to the kingdom for Haj and Umrah annually.

Representatives of TAAP while addressing a presser in the press club demanded the repeal of the new biometric enrollment system for easing the process of travelling for the pilgrims.

He said pilgrims from around 100 cities of Pakistan apply for Haj and Umrah visas every year, and that the Saudi Consulate in Karachi, and Embassy in Islamabad work hard in processing their application day and night. By contrast, Etimad is fingerprinting applicants through only five branches across the country.

“A man from Sukkur along with his family—who is also going for Umrah—has to travel all the way to the Karachi Etimad office for his fingerprints,” said Rinch, adding that the biometric system increases visa expenses for applicants.

He asked why Etimad, being a private company, was recording biometric data of applicants when that information is already contained within machine readable Pakistani passports.

The association representatives added that other countries including Iran, Egypt, India and Bangladesh have also rejected the biometric system.

Regarding the increase in expenditures, Raja Khalil, vice chairman of the association, said Etimad is charging a separate fee for the biometric enrolment in different categories. He claimed that for urgent service, the fee is up to Rs22,400, whereas the regular charge is Rs500.

While the ordinary biometric enrollment takes at least 15 days, the 14 day period specified by Ministry of Foreign Affairs would have expiredand the fee paid by many applicants has gone in vain.

The officials argued that TAAP will file a petition in this regard.

“We have written to Etimad three times to come and discuss with us the system but they are not contacting us,” said Khalil, adding that if the system continues in the same manner, then the number of pilgrims from Pakistan would be reduced by half.

The association representatives said Etimad had got the contract for biometric enrolment in Pakistan from a Dubai-based company, VSF Tasheel which is owned by a Hindu.