Round two: Pakistan aiming to wrap up series against New Zealand

Round two: Pakistan aiming to wrap up series against New Zealand

Hosts firm favour­ites to win fourth match in a row and claim 2-0 lead
By Our Correspondent
Published: November 16, 2014
Tweet Email 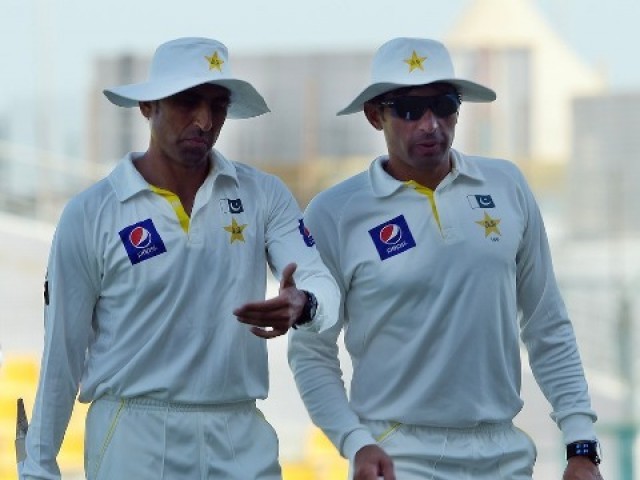 The hosts face question marks over their opening batsmen, with Ahmed Shehzad already back in Pakistan after sustaining a head injury and all-rounder Muhammad Hafeez now a doubt due to a problematic hamstring. PHOTO: AFP

KARACHI: After having won three Tests on the trot, Misbahul Haq’s charges are on a roll and Pakistan will be looking to make it four in a row in the second Test against New Zealand, which starts on Monday, and clinch the series at the Dubai International Cricket Stadium.

The hosts, however, face question marks over their opening batsmen, with Ahmed Shehzad already back in Pakistan after sustaining a head injury and all-rounder Muhammad Hafeez now a doubt due to a problematic hamstring.

In case Hafeez is ruled out of the second Test, Pakistan still have two genuine openers in Taufiq Umar and Shaan Masood to fill the spots left vacant by the injuries to the first choice pair.

The Express Tribune understands that, barring an injury, Taufiq is a certainty for the second Test in place of Shehzad, with Masood’s inclusion depending on Hafeez’s situation.

Though Pakistan’s batsmen have amassed runs against both Australia and New Zealand in record breaking fashion, the real surprise has been the way the inexperienced bowling attack has performed in adverse conditions and captain Misbah has acknowledged the quartet of Imran Khan, Rahat Ali, Yasir Shah and Zulfiqar Babar.

“It’s a real big achievement getting 20 wickets every match on these pitches so hats off to our bowling,” said Misbah.

“These aren’t pure turning tracks, with only the odd ball spinning from the rough so our spinners have done a good job, while our fast bowlers have also bowled their heart out and took wickets on tracks where even world class bowlers such as Mitchell Johnson have struggled.”

The skipper added that he has been pleased by the way the team has carried on the momentum of the Australian series win into this one.

The 40-year-old recently became Pakistan’s most successful captain with 15 victories – one more than both Imran Khan and Javed Miandad – and Misbah admitted he never thought he could achieve the feat.

“Being at the top of the pile is something which I never thought was possible, especially when you see names like Imran, Miandad and Abdul Hafeez Kardar, to name a few, on the list. I think they were all better than me and will always remain better captains,” said the humble skipper.

Despite the victories, Misbah had been questioned for not enforcing follow-ons both against Australia and New Zealand. However, he responded that it is important to give the bowlers a breather in batting-friendly conditions and not provide the opposition with even a sniff.

Hafeez’s bowling action was reported in the first Test and he will now have to undergo tests but reports of improvement in Saeed Ajmal’s action have increased the hopes of a return for the suspended off-spinner. Misbah admitted that Ajmal will be welcomed back once he gets clear because of all the matches he has won in his career.

Despite their superb record in the UAE, Misbah also said that the team misses playing at home. “We miss playing at home because you get a different sort of support from the fans and it is disappointing that our people have not been able to see the team win like this back at home,” he said.