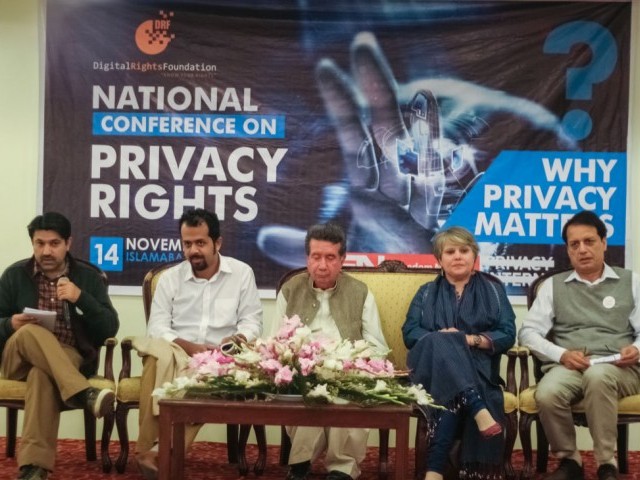 Afrasiab Khattak along with former MNA Bushra Gohar at the National Conference on Privacy Rights in Islamabad. PHOTO: COURTESY DRF

ISLAMABAD: Digital rights activists on Friday called for greater transparency in the way the government grants warrants for surveillance, and the number of offences prevented by such practices as a whitepaper was presented on surveillance in Pakistan.

This was advocated at a conference on privacy rights and digital surveillance organised by the Digital Rights Foundation in partnership with Privacy International and Freedom Network in Islamabad on Friday.

The conference concluded by recommending the public to use their Right to Information more assertively and frequently and by demanding the government publish annual report on the number of warrants granted for surveillance, and the number of offences prevented by surveillance or interception of information.

The conference sought debate on the lack of legislation and laws pertaining to cyber space with a focus on privacy.

Waqas Mir, a lawyer from Lahore with expertise in constitutional laws and free speech, presented a whitepaper on surveillance in Pakistan.

This whitepaper took the audience and readers through the history and development of legislation around privacy and surveillance in the country with a focus on recently drafted Fair Trial Act 2013.

Multiple panels and session talks were held discussing global and local perspectives of surveillance in the digital age. Panelists also talked about solutions that could be employed taking examples from other countries world over while going over the case studies where common citizens, journalists, feminists, NGOs and dissidents at large have been harassed and attacked.

The key points that were raised during this national conference on privacy and surveillance include growing concerns over tools/ mechanisms employed by government especially after FinFisher’s license expiry in 2013, concerns shared by the journalism community over how surveillance has negatively impacted the standards of journalism in the country and urgent need of legislation around digital security to safeguard citizens.

Continuing the dream: Olympiad is back after two years to host 60 schools