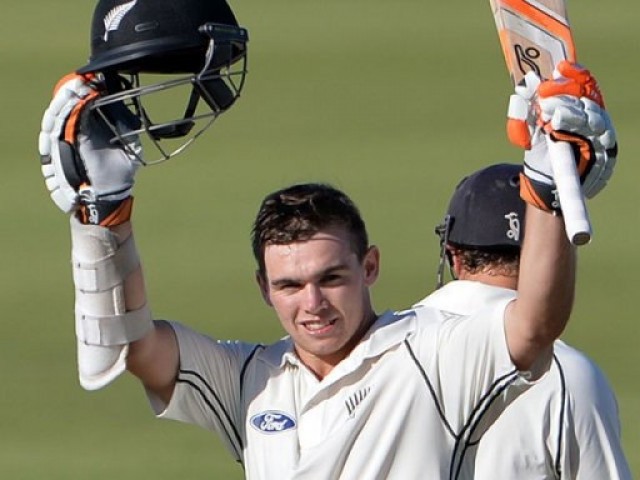 Tom Latham was the only batsman to show grit against Pakistan with a century in the first innings of the first Test. PHOTO: AFP

DUBAI: New Zealand opener Tom Latham is convinced Pakistan’s spinners are not unplayable, but his team will have to adapt quickly if they want to level the series in the second Test starting in Dubai on Monday.

Pakistan won the first Test in Abu Dhabi by a big 248-run margin to take a 1-0 lead in the three-match series.

New Zealand’s travails against spin will not lessen at the Dubai stadium where the pitch is more likely to turn.

That came on the back of Babar’s 14 and Shah’s 12 in the 2-0 rout of Australia that preceded the current series.

But Latham, who scored his maiden hundred in the first Test, was convinced Pakistan’s spinners can be negated.

“Pakistan’s spinners obviously have variations, the make up of their side is a left-armer and a leg spinner and they do challenge us, but I don’t think they are unplayable,” said Latham after New Zealand’s practice on Saturday.

“We showed that on the morning of the fifth day and Ish [Sodhi] and Trent [Boult] dug in,” said Latham of the tenth wicket stand of 54 between Sodhi and Boult.

Sodhi made a career-best 63 while Boult remained not out on 19.

“They played really well so if we get ourselves in those situations and keep them [spinners] out for long then we can be able to put a big total on the board,” said Latham, whose father Rod also played for New Zealand.

“It’s a good opportunity to right some wrongs, we have shown that in the past in the West Indies after losing the second Test and then come back by winning the third and win the series,” said Latham of New Zealand’s 2-1 win in June 2014.

Pakistan have retained the same squad for the second Test, minus opener Ahmed Shehzad who was ruled out of the Test series due to a minor skull fracture after being hit by a bouncer from seamer Corey Anderson.

Shehzad made a career-best 176 in that knock.

The third and final Test will be played in Sharjah (November 26-30). The teams will also play two Twenty20s and five one-day internationals.