Sugges­t that she should apply afresh for youth scheme­
By Abdul Manan
Published: November 14, 2014
Tweet Email 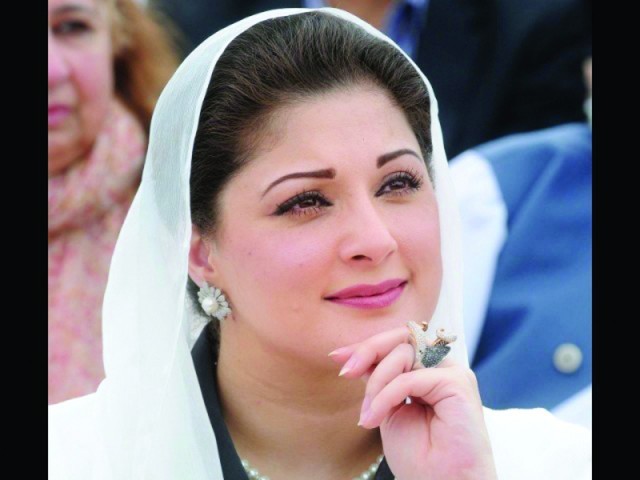 Pakistan Muslim League Nawaz (PML-N) leaders who politically groomed Maryam Nawaz have proposed her three options, including fresh application for the chairpersonship of the Prime Minister Youth Programme (PMYP) through advertisement. However, Prime Minister Nawaz Sharif will take a final decision in this regard after his return, The Express Tribune has learnt.

Maryam on Wednesday resigned from PMYP chairpersonship after Lahore High Court Judge Syed Mansor Ali Shah held out a choice to Maryam to either resign as chairperson or he will issue ruling on Friday.

Well-placed sources in the PML-N said that party leaders close to Maryam have suggested her to consider three options. First,the federal government should make proper mechanism for appointment of PMYP and to advertise its position. Maryam should apply for the PMYP position through formal procedure this time. The complainant in the LHC also argued that the appointment was made without inviting applications and being properly advertised.

The other two options are related with party organisations.

The sources said the other suggestion given by senior leaders was for Maryam to replace PML-N’s Women Wing head Senator Nuzhat Sadiq. The third option is that she should replace her husband MNA Captain (retd) Muhammad Safdar as president of PML-N’s Youth Wing.

The sources said that PM Nawaz Sharif after his arrival from UK will decide what role Maryam takes up.

The sources said that PM Nawaz, who initiated PMYP worth Rs100 billion, considers it very significant for his political career and hence does not want to see anyone else appointed as the programme chief for a variety of reasons.

They said that office of PMYP is located in the PM Office and all execution agencies under PMYP knew well that the programme is being run by PM’s daughter and that none would be spared for any blunders committed by them. In absence of a strong chairperson, execution agencies might show laziness in performing their roles in the schemes, the sources added.

They added that the PM takes ownership of the project and even Punjab Chief Minister Shahbaz Sharif has been kept away from the PMYP. As the party is struggling to lure youth through various schemes, it banks on Maryam to serve as brand leader.

Under PMYP, six major initiatives are being run and the party has so far not assigned anyone either as acting or permanent PMYP chairperson.

They are (1) PM’s Youth Business Loans for young people between age group of 21 and 45 years. (2) PM’s Qarz-e-Hasana, the microfinance interest-free loan facility aimed at helping the industry raise current access level of 2.5 million people to 5.0 million in the next 5 years. (3) PM’s Youth Training Scheme stipulates on-the-job- training/internships at private and public sector offices for young individuals. (4) PM’s Youth Skills Development Scheme aims at providing vocational training to unemployed young individuals. (5) PM’s Provision of Laptops scheme is an attempt to enhance the scope of research and quality education in the country and increase the access to information technology. (6) PM’s Fee Reimbursement for Poor scheme aimed at providing scholarships for postgraduate degrees to students of remote and under-privileged areas.

PMYP Director Media Mubashir Hussain said the government has not yet appointed anyone for vacant post of chairperson.